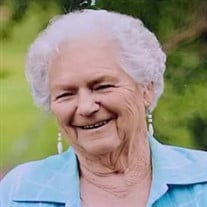 Maxine Craghead Fonnesbeck, 94, beloved wife, mother, grandmother, and great-grandmother passed away on Monday, April 20, 2020 at Rocky Mountain Care in Logan, Utah. Maxine was born December 21,1925. She was raised in Brigham City, Utah and graduated from Box Elder High School. During World War two, she was a hyster driver at the Defense Depot in Ogden, Utah, where she met and later married Marthinus J. Fonnesbeck. They were married on November 9, 1944 in Brigham City, Utah. They moved to Logan and lived there. They took out their endowment and were sealed in the Logan LDS Temple on February 16, 1968. Maxine was a faithful member of the Church of Jesus Christ of Latter-day Saints and held many callings in the Logan 15th Ward. She is survived by her children, Shirley (Courtney) Stauffer, Barry (Tawna) Fonnesbeck, Bill Fonnesbeck, Vickie Lynn Fonnesbeck, Carmen Fonnesbeck Drollinger, Rick(Vicki) Fonnesbeck, her brother Dennis Craghead, and many grandchildren and great-grandchildren. She was preceded in death by her husband, her daughter Irene Fonnesbeck Bischof, her parents, brothers and sisters. A private family viewing and graveside services will be held in Logan Cemetery on April 24, 2020. The family would like to extend heartfelt appreciation to Rocky Mountain Hospice for their wonderful care for our mother.

The family of Maxine Craghead Fonnesbeck created this Life Tributes page to make it easy to share your memories.

Send flowers to the Fonnesbeck family.