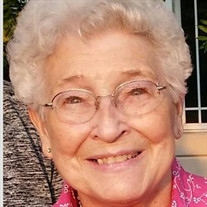 Emma Maxine Olson James passed away at Logan Regional Hospital on April 3, 2017 at 88 years of age from complications of a fall. Maxine was born January 29, 1929 to Reuben Emil Olson and Martha Elmira Eggleston Olson in Cornish, Utah. In 1946, Maxine met Donald Heber James, and they were married March 30, 1946. They were married for 71 years on their last anniversary. Don and Maxine lived in Logan for most of their life, residing on the Island for many years. Maxine was a member of the Church of Jesus Christ of Latter-day Saints. She served in many callings, including Primary president, Relief Society president, Primary secretary, Blazer Scout leader, and dedicated visiting teacher. She and Don served an LDS mission to the Washington Spokane Mission. They enjoyed this calling and made many lifetimes friends. They also worked in the Logan Temple as officiators for many years. Maxine's most treasured calling was that of Wife, Mother and Grandmother. She is survived by six children: Alan (Bonnie) James, Hyrum, Utah; Carole (David) Hibshman, Logan, Utah; Bruce (Kelly) James, Hyrum, Utah; Paul (Eileen) James, Hyrum, Utah; LaDawn (Steven) Marcek, Logan, Utah; and Scott (Tammy) James, Nibley, Utah. She is also survived by 28 grandchildren and 48 great-grandchildren with three great-grandchildren who will be born this summer and fall. Maxine was preceded in death by her husband Don, daughter-in-law Garnett James, father and mother Reuben and Elmira Olson, brother Walter, sister Eleda Hale, and brother-in-law, Rex Hale, Funeral services will be held on Monday, April 10, 2017, at noon in the Nibley 10th Ward chapel at 2825 South 1000 West, Nibley, Utah, with Bishop Sean Johnson officiating. There will be a viewing on Sunday evening, April 9, 2017, from 6:00-8:00 at Nelson Funeral Home, 162 East 400 North, Logan, Utah, and at the Nibley 10th Ward building on Monday, April 10, 2017, from 10:00-11:30 a.m. We love and appreciate all of those who have loved and supported Mom throughout her life and for the last few years as she has lived at Terrace Grove. Thanks to Terrace Grove staff, Logan Regional Hospital Transitional Care Unit staff, and to Access Home Health Care staff for the wonderful care they provided for her. Interment will be in Millville City Cemetery. Condolences may be sent to the family at www.nelsonfuneralhome.com.

Emma Maxine Olson James passed away at Logan Regional Hospital on April 3, 2017 at 88 years of age from complications of a fall. Maxine was born January 29, 1929 to Reuben Emil Olson and Martha Elmira Eggleston Olson in Cornish, Utah. In 1946,... View Obituary & Service Information

The family of Maxine O. James created this Life Tributes page to make it easy to share your memories.

Send flowers to the James family.