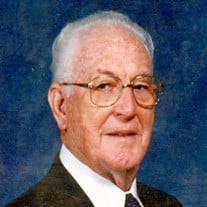 Mearl Kay Bair, our loving father, grandfather (28), great grandfather (82) and great great grandfather (11) was reunited with his wife, parents, siblings and many other family and friends on Sunday, July 14, 2019. Mearl was born April 1, 1921 in Logan, Utah to Henry “Ted" Ellis and Eva Nessen Bair. When Mearl was seven, his family moved to Oceanside, California. When he was fourteen, his father was killed in an airplane accident and the family moved to Howell, Utah, where he met his future sweetheart, LaPriel Marie Sorensen. After Mearl served a Spanish American Mission, he and LaPriel were married in 1944 in the Salt Lake Temple, just before Mearl left to serve in the U.S. Navy during WWII. They were married for 74 years. Their family of five children was raised in Garland and Providence, Utah. Together they served as President of the Paraguay Mission when Paraguay first became its own mission. Later they served a mission in Guatemala and as MTC Director in Mexico City. They were assigned by the Church to work in Ghana, Africa and then served as the Mexico City Visitor Center Director. They also served in the Logan Temple for many years. Mearl was very active in the Church of Jesus Christ of Latter-day Saints his entire life and served in many church callings, including in a bishopric and in a stake presidency. Mearl also served as a Patriarch for many years and was the Spanish Language Patriarch for all of Cache Valley. Mearl is survived by five children and their spouses: Ted and Pat (Nelson) Bair, Sue Ann and Jerry Capener, Merlynn Gunnell, Byron and Pam (Ivie) Bair and Brent and Cassie (Larsen) Bair. He is also survived by a brother-in-law, Ray Sorensen and many extended family members. Funeral services will be held Saturday, July 20, at the Providence Ward Chapel on 300 South Main in Providence, UT at 12:00 noon, with a viewing at 11:00 a.m. There will also be a viewing held on Friday, July 19, from 6:00 to 7:00 p.m. at the Nelson Funeral Home on 162 E 400 N in Logan, UT. Interment will be in the Logan Cemetery. Condolences and memories may be shared with the family online at www.nelsonfuneralhome.com

The family of Mearl Kay Bair created this Life Tributes page to make it easy to share your memories.