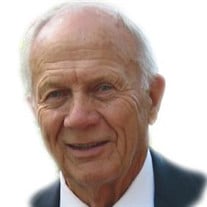 “A man's friendships are one of the best measures of his worth,” Charles Darwin. Melvin Gaylord Leavitt was born April 3rd, 1930 to William Verlan Leavitt and Ethel Kent. He passed away September 6, 2015 in San Diego, CA, surrounded by his children, KaraLyn Drake (Lynn), Kent Leavitt (Janalee), Terri Calvert (Randy), and Eric Bryan (Louise). Gaylord grew up in Lewiston Utah graduating from North Cache High School and Utah State University. He married Edna Carol Weeks of Smithfield, Utah on February 14, 1951. Gaylord received his DDS degree from Northwestern University in Chicago and practiced dentistry in San Jose, CA, collecting dear friends all along the way. After retiring he lived in San Diego for the last 20 years. As a young man, he enjoyed playing football and saxophone and the work ethic he learned on the farm benefitted him his entire life. Outside the dental office he did woodworking, made jewelry, raised a great garden and raised wonderful Boy Scouts. He was always willing to lend a hand to those in need. Gaylord not only worked hard, he played hard. He lived to be in the great outdoors. Hunting and fishing and skiing with friends were some of his favorite pastimes. He traveled all over the world perusing these. At eighty years old he refused to have his damaged ankle fused, instead procuring a rare replacement ankle. This required custom made ski boots, but he continued to ski! He planned annual ski trips for a group of friends who skied together for 40 years. He was also the planner of high school reunions and semi-annual family reunions. He was frequently the chef at these events, sharing his famous Caesar Salad and other gourmet specialties with hundreds. "Grandpa" remained the greatest friend of all to his family. To his final days he was a loving patriarch of 4 children, 17 grandchildren and 35 great-grandchildren. They are the legacy that he leaves to the world, and he has definitely left it a better place for his family and many friends. Funeral services will be held in the Cove Ward Chapel, 12832 North 1200 East, Cove, Utah, on Saturday September 19th at 11:00am. Preceding that will be viewings that morning from 9:30 to 10:30am at the ward building and Friday from 6 to 8pm at Nelson Funeral Home, 85 South Main Street in Smithfield. Interment will be in the Lewiston Cemetery. Condolences and memories may be shared with the family at www.nelsonfuneralhome.com

&#8220;A man's friendships are one of the best measures of his worth,&#8221; Charles Darwin. Melvin Gaylord Leavitt was born April 3rd, 1930 to William Verlan Leavitt and Ethel Kent. He passed away September 6, 2015 in San Diego, CA, surrounded... View Obituary & Service Information

The family of Melvin Gaylord Leavitt created this Life Tributes page to make it easy to share your memories.

Send flowers to the Leavitt family.