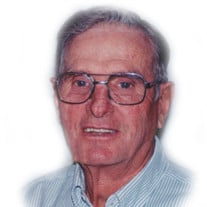 Melvin Jay Woodward, 84, passed away peacefully in his sleep March 2, 2015 at his home in St. George with his wife and caretaker Ruby at his side. He was born Oct 23, 1930 in Franklin, Idaho, a son of Ivan Woodward and Ordell Mecham Doney. He was the 3rd of 6 children and also had 8 half-siblings. He learned the value of hard work by working on the family farm. He excelled in sports, playing basketball for Preston High School, and then played for Utah State Agriculture College. He served an honorable mission to the Samoan Islands for the Church of Jesus Christ of Latter-Day Saints from 1950-1953. He loved to get together with the Samoan missionaries and people on an annual basis. He served in the Armed Forces for two years stationed in Bayonne, New Jersey, Fort Carson, Colorado, and the Panama Canal. Following his service, he attended USU graduating with a Vocational Agriculture degree in 1960. He married Ruby Jean Larsen on June 6, 1960 in the Logan LDS temple and together they raised four children. He worked for Del Monte in Ogden then for U&I Sugar Company in Idaho and Washington. In 1974, he and Ruby moved their children to Newton where he began his lifelong dream of farming. He helped install the city irrigation system and loved being a part of Newton city. He enjoyed singing in many choirs and could often be heard singing “Oh Lord, It’s Hard to be Humble.” He could also play several different instruments. He loved talking on the phone and was famous for his early morning calls. He remained close to his siblings throughout his life. He was a skilled builder having built two homes, one in Rexburg, Idaho and Newton, Utah. He could repair and fix anything. He enjoyed traveling throughout the US, Guatemala, Galapagos Islands, Ecuador, and Panama Canal. He disliked the cold, so he became a snowbird purchasing a home in St George in 2002. He was a faithful member of the LDS church. He served in many callings including the bishopric, scouting, ward chorister, and home teacher. Jay is survived by his wife Ruby; children, Judy (Alan) Ashcroft, Jed (Colleen) Woodward, Janene (Kyle) Comer, Jill (Jason) Vantrease; and 12 grandchildren; Justin, Jessica, Kacie, Tyler, Kylee, Cameron, Colton, Joshua, Jarom, McKenzie, Melissa, and Ethan. Also survived by siblings Clair, LuDean, and Lynn, and many extended family. A memorial service was held in St George on March 4, 2015. A viewing will be held on Friday, March 6 from 6 to 8 p.m. at Nelson Mortuary in Smithfield and at the Newton LDS church house on Saturday, March 7 from 9:30-10:30 a.m. Funeral services will follow at 11 a.m. Interment will be at Newton Cemetery. In lieu of flowers, please consider donating money to the LDS Perpetual Education Fund.

Melvin Jay Woodward, 84, passed away peacefully in his sleep March 2, 2015 at his home in St. George with his wife and caretaker Ruby at his side. He was born Oct 23, 1930 in Franklin, Idaho, a son of Ivan Woodward and Ordell Mecham Doney.... View Obituary & Service Information

The family of Melvin Jay Woodward created this Life Tributes page to make it easy to share your memories.

Melvin Jay Woodward, 84, passed away peacefully in his sleep...

Send flowers to the Woodward family.