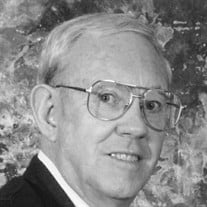 Merritt Cornelius Floyd, age 86, rode his favorite horse Bird off into the sunset August 15, 2018 at Maple Springs in North Logan, Utah. He was born December 28, 1931 in his Grandmother Curran’s home in Raton, New Mexico, the eldest child of Merritt Charles and Audrey Elizabeth (Curran) Floyd. He married his eternal sweetheart Joan Danielson September 2, 1961 in the Logan Temple. She died April 18, 2015. They raised four children together - a daughter and three sons. Now Joan and Merritt are back together again. Merritt graduated from Delta High School in May 1949 in Delta, Utah. He enlisted in the U. S. Air Force December 5, 1951. He received his basic training at Lackland Air Force Base (AFB) near San Antonio, Texas. He served at Great Falls AFB near Great Falls, Montana, overseas at Wheelus AFB near Tripoli, Libia, North Africa and at Nellis AFB near Las Vegas, Nevada. He rose to the rank of Staff Sargent and was honorably discharged December 4, 1955. He then went to Utah State University in the fall of 1956. He graduated in June 1964 with a BS in Electrical Engineering. Following graduation he was employed by the Bureau of Reclamation’s Colorado River Storage Project in Montrose, Colorado. After eight years of experience, he became the supervising electrical engineer for the Blue Mesa, Crystal, Flaming Gorge, Fontenelle, Molina and Morrow Point Powerplants. He retired from the Bureau of Reclamation in November 1990. Merritt was re-employed in July 1991 by PLM Technologies, Inc., an electrical power engineering consulting firm out of Evergreen, Colorado. PLM had a contract with Western Area Power Authority in Salt Lake City, Utah. He was the contract manager for PLM who provided an engineering consulting service for Western. He retired from PLM in March 1995 and he and Joan lived out the remainder of their lives in North Logan, Utah. One of his great loves while living in the Montrose area was the beautiful San Juan mountains. He spent many enjoyable days and nights in those mountains with his family or Scout Troop camping or backpacking. He had many father and sons hunting and fishing trips. He was active in the Scouting program and took his Scouts into the mountains often so they could learn and practice scouting skills. The most important goal he emphasized to all was to enjoy, appreciate and help preserve the beauties and value of nature. In addition to his love for the outdoors, his other hobbies were working on his cars, woodworking, black and white photography, building model aircraft and his personal history. He was a great fix-it man fixing almost anything that broke down. Not many things made him happier than when he had his head under the hood of his old 1941 Ford. He obtained this car shortly after graduating from high school - minus an engine. He bought a rebuilt engine, set it in the car, put all of the nuts and bolts back in place and then tuned the engine to his precise specifications. He loved the sound of a well-tuned Ford V8 engine when it was running. Then, quite often, along with his faithful old dog Mickey, he enjoyed many miles of driving this old car over the hills and through the woods. Merritt was active in youth sports while living in Montrose. He coached youth baseball five years, youth basketball four years and youth football one year. His teams finished at or near the top in baseball and basketball each year. He thoroughly enjoyed working on the field of play with these young athletes. He emphasized sportsmanship, play a little better than your best, always play hard, and enjoy the game - winning was the sweet result of achieving these four goals. It was very rewarding to him to watch some of his players go on to participate well in high school sports. Merritt loved horses. He often said he felt his love for horses began before he was born. He learned to ride around the age of six. This was preferable to walking two and a half miles to school. Riding was a satisfying exhilarating experience he thoroughly loved. Merritt became a member of the Church of Jesus Christ of Latter-day Saints June 6, 1959. He served in a number positions such as councilor in the Young Men’s Superintendency, Scoutmaster, Young Men’s President, two bishoprics, two branch presidencies, High Council, Ward Clerk, Financial Clerk, Stake Clerk, High Priest Group Leader twice and Bishop. Most of his service over the years was working with the youth of the Wards, Branches, and community. He loved working in Scouting and did much to provide an excellent Scouting experience for the Scouts of Troop 473. He is survived by one daughter Nancy Joan (Mike) Gardner of Claremore, Oklahoma, three sons Joseph Daniel of Evanston, Wyoming, Jonathan Neil (Vicky) of Wellsville, Utah and Jerald Arthur (Susan) of Durant, Oklahoma, ten grandchildren, 13 great grandchildren, one brother Phillip (Ruth) of Helper, Utah and one sister Thelma Mae (Bob) Elliot of Kelseyville, California and brothers-in-law Arthur (Marian) Danielson of Corinne, Utah and Bruce Thompson of Castro Valley, California. He was preceded in death by his sweetheart Joan, his Mom and Dad and his youngest brother Donald. Funeral services will be held at North Logan 2nd Ward Chapel, 1105 East 2100 North, on Saturday, August 25, 2018 at 11 a.m. with a viewing prior from 9:30-10:30 a.m., Burial will be in the Logan Cemetery. Condolences and memories may be shared with the family online at www.nelsonfuneralhome.com

The family of Merritt C. Floyd created this Life Tributes page to make it easy to share your memories.

Send flowers to the Floyd family.