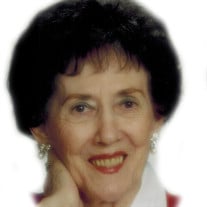 Mildred Cooper Hoskins Cook, age 92, loving wife and mother; proud grandmother and great grandmother, and devoted friend to all who knew her, passed from this life on March 7, 2016 in Logan, Utah. Mildred was born July 16, 1923 in Wellsville, Utah to William Jenkins and Elizabeth Cooper Hoskins . She was one of six children: Leo, her oldest brother, three sisters, Afton, Beth and Edna, and a younger brother, Bill, have all preceded her in death. Like their sturdy ancestors from Scotland and Great Britain, the members of this family were pioneers in their own right. They hoped and worked for a better world as they struggled through the trials of the Great Depression, and the World War which followed. And within the unity of that family circle, a special bond was nurtured. They learned to laugh at themselves and at each other. They were more than siblings, they were good friends. The ability to see the humor in everyday life has served them very well. Life is a good teacher, providing lessons which build character and faith. Mildred was very ill as a child, and health problems have continued most of her life. She has seen trials, and troubles, and setbacks. But determined and feisty by nature she usually managed to meet them head on She wrote in her history: “Many times I have prayed and received help in choosing the right thing to do. I have been blessed when I have been ill. My prayers have always been answered.” “Midge” as she was called by friends and family, attended school in Wellsville and graduated from South Cache High. During the early years of World War II she worked in Ogden at the 2nd Street Defense Depot. One afternoon, she caught the eye of the handsome young driver of the shuttle she took to and from work. By the time they got back to Wellsville, Lew had wrangled a date. The miles between Wellsville and Lew’s home in Garden City made “gas rationing” a reality in their courtship, but love would have its way. They were married in the Logan Temple, Nov 18, 1943. Faith, determination, and a lot of give and take have kept them together for more than 72 years. Mildred loved music, and though she was only blessed with what she termed a “choir voice” you could often hear her humming a tune as she worked in the garden or did household chores. She started piano lessons when she was 75 and later tried her hand at playing the guitar. And often she could be heard singing out loud as she rocked a grandchild to sleep. Recalling such moments, the words of a favorite hymn take on renewed meaning. “There is music in my soul today… for Jesus listening can hear the songs I cannot sing.” There is a wholeness that comes as we accept our limitations and let go of unrealistic dreams. Mildred didn’t focus on the things she couldn’t do. She was resilient and willing to try new things. She believed that if “something is worth doing it is worth doing right.” She was candid and outspoken and like it or not, she let you know exactly how she felt. She took a special interest in people. Always one to strike up a conversation with a stranger, or stop by to visit a sick friend, or reach out to a new neighbor, she always had time to play checkers, or ‘go fish’, or some other game with a granddaughter or grandson. She served in numerous Church callings through the years. She was a Relief Society visiting teacher most of her life. She also served as a teacher in Primary, Young Women, and Sunday School. She particularly enjoyed the five years she and Lew served as ordinance workers in the Logan Temple. Her most devoted service, however, has been to her family. She and Lew have raised three children: Mike, Gary, and Kristy. They are the proud grandparents of 18 grandchildren as well as a growing gaggle of great grand children. Funeral Services will be held Saturday, March 12th, a 12:00 pm at Nelson Mortuary, 162 East 400 North in Logan. A viewing will be held between 9:30 and 10:45 that morning. We express deep appreciation to the staff of Legacy House and Access Home Healthcare for the kind and gentle care they have provided. The Descendents of Lew Deland Cook and Mildred Hoskins Michael Lew Cook and Sherry Butler Michelle Leigh Cook & Darrell Mark Tullis Gregory Mark Tullis Ava Chloe Tullis Julia Magdalena Tullis Kathrine Sherry Tullis Michael Kevin Cook & Kathryn Elizabeth Cook Tyler Logan Cook Sydney Alexis Cook Cecily Kaitlyn Cook John Bryant Cook & Kimberly Choate Riley John Cook Hannah Nicole Cook Halle Olivia Cook Ashley Rosa Cook Amy Elizabeth Cook Jennifer Alnora Cook & Jonathan A.Merchant Alexander Lucas Merchant Ethan Jonas Merchant Sydney Gwynyth Merchant Gabriel Elijah Merchant Charlotte Rian Merchant Susanne Nicole Cook Gary H Cook and Helen Morgenegg Matthew Todd Cook and Ruth Harrison Vincent Gary Cook Isabella Annette Cook Morgan John Cook Ann Marie Cook and Patrick McVey Abigail Marie McVey Erin Olivia McVey Luke William McVey Catherine Elizabeth Cook & Edwin Victor Davis III Stella Helen Davis Rachael Marie Davis Dustin Andrew Cook Benjamin James Cook Stephen David Cook Spencer Lewis Cook Kristy Cook and Lyle Powell Todd M. Olsen Justin L. Olsen Shelly Powell Fagerlund Lily Fagerlund Lais Fagerlund Mazzy Fagerlund Erin Powell and Don Donaldson Finn Donaldson Shea Donaldson Ryder Donaldson Erika Powell Green Chloe Green Jackson Green

Mildred Cooper Hoskins Cook, age 92, loving wife and mother; proud grandmother and great grandmother, and devoted friend to all who knew her, passed from this life on March 7, 2016 in Logan, Utah. Mildred was born July 16, 1923 in Wellsville,... View Obituary & Service Information

The family of Mildred Hoskins Cook created this Life Tributes page to make it easy to share your memories.

Send flowers to the Cook family.