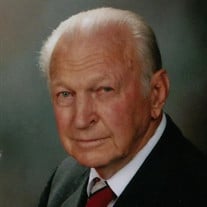 Milton Wallace Butler - beloved father, grandfather, brother, and friend - passed away peacefully at the age of 90 on Sept 2, 2016, at the home of his daughter in Smithfield, Utah. Milton was born on April 4, 1926, in Driggs, Idaho, to Asa Milton Butler and Mabel Clair Wallace. He was the 3rd of 4 children, with two older sisters: Phyllis (Maurice Lambert), and Margaret (Conrad Head), and a younger brother, Blaine (Barbara Gillette.) Milton grew up in the shadow of the Tetons working side by side with his father on the family farm, where he developed a strong work ethic which stayed with him throughout his life. As a boy he milked cows by lantern light, usually in the dark, and all too often on cold minus 30 degree mornings so frequent in Teton Valley. He loved nature, farming, and appreciated the simple things. He was genuinely happy with what he had. Milton graduated from Teton High School where he was active in athletics and music. It was there he met and fell in love with his sweetheart, Betty Lou Green. She waited patiently while he entered the United States Navy to serve in World War II. During his one-week leave before duty in the Pacific they were married in the Salt Lake Temple on November 29, 1944. After his military service, Milton & Betty Lou returned to their beloved Teton Valley to begin their life adventures. They were blessed with three children: the first, a girl, died at birth; the second, a son, Kyle Milton, and last, a daughter, Louise (Letham). Theirs was a home filled with love, laughter, and music. Together they enjoyed 70 years of happiness wedded to their best friend. Milton worked as a farmer, carpenter, and could repair anything. He was blessed with a quick wit and perfect timing for a joke. This was the perfect fit to one of Milton and Betty Lou’s best known adventures: Pierre’s Playhouse, a melodrama theatre in Victor, Idaho, which they founded with four other couples. After several years of fun in Idaho, they and their friends built a second playhouse in Cave Creek, Arizona, entertaining there during the winter months. In Arizona, Milton kept busy owning a health food store. He loved learning about what contributed to good health and used it to live a long and active life. He never saw a doctor until his 90th birthday and was able to take care of Betty the last few years of her life. Milton was an active, faithful member of the Church of Jesus Christ of Latter Day Saints, serving in many teaching and leadership capacities. He had a strong testimony of the gospel, which never wavered. He served faithfully as a home teacher all his life. Milton was the kind of man that looked for what needed to be done and just did it. He was always giving quiet service to those around him, never looking for acknowledgement or reward. He was gentle, accepting, and kind to all he met. Milton is preceded in death by his parents; his wife; his infant daughter; his son; his sister, Phyllis; and two brother-in-laws Maurice Lambert and Conrad Head. He is survived by a sister, Margaret Head, of LaGrande, Oregon; brother, Blaine (Barbara), of Centerville, Utah; daughter, Louise (David) Letham, of Smithfield; 4 grandchildren - Melody Baugh, Christopher Baugh, James Baugh (Brittney McInnes), and Jen Ogden (Adam); 7 great grandchildren; sister-in-law, Erna Murri (Robert) of Salem, Oregon; and brother-in-laws: Delbert Green (Nina Poulson) of Spokane, Washington; Gary Green (Jeannine Beard) of Alta, Wyoming; Ben Green (Trudy Volman); & Ken Green of Driggs, Idaho. The family would like to thank his neighbors & friends for their generosity and care. A viewing will be held at the Smithfield Nelson Funeral Home, 85 S. Main Street; Smithfield, Utah, on Monday Sept 5, 2016, from 6 to 7 p.m., followed by a brief memorial service. Interment and graveside service will be the following day, Sept 6th, at the Driggs, Idaho Cemetery at 1:00 p.m. Military rites will be conducted by the Driggs American Legion. Thank you Dad, Papa, Uncle Milt, for your great example of faith and integrity. We love you and miss you.

Milton Wallace Butler - beloved father, grandfather, brother, and friend - passed away peacefully at the age of 90 on Sept 2, 2016, at the home of his daughter in Smithfield, Utah. Milton was born on April 4, 1926, in Driggs, Idaho, to Asa... View Obituary & Service Information

The family of Milton Wallace Butler created this Life Tributes page to make it easy to share your memories.

Send flowers to the Butler family.