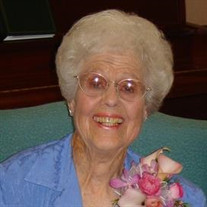 Cache Valley lost one of the most congenial of the public when Mona K. Bair left this life on 06 April 2016. Mona lived the majority of her life in Logan, and passed away at Logan Regional Hospital of causes incident to her almost 97 years of age. Mona was born on 09 June 1919 in Smithfield, Utah, the daughter of Joseph F. Kastli and Vernie V. Nielsen Kastli. She was the middle of three daughters, and following her family's move to Logan, she was educated in the Logan City School System. Mona married Melvin H. Bair on June 24, 1941, and their marriage was late solemnized in the Logan LDS Temple. During the early part of World War II, the newlyweds lived in Boulder City, Nevada and Lawrence, Kansas. Once Mel volunteered for military service with the US Navy, Mona returned to Logan for the remainder of WW II. Upon Mel’s discharge from the Navy, they resumed their life together in Logan. Mona and Melvin lived and loved together for 64 years, until he passed away in December of 2005. Their marriage was blessed with two children, Christine B. Laird and Ralph K. Bair Along with her responsibility as a mother, Mona also worked at JC Penny, Pacific Fruit and Produce, and most notably at Logan Savings and Loan Association. Few people have the innate customer service skills that were one of Mona’s inborn talents. She provided 20 years of kind, helpful, considerate, and dedicated service to all her Logan Savings customers, many of whom became her lifelong friends. Upon retirement in 1981, Mona was the Branch Manager of the Logan Savings Cache Valley Mall Branch. Mona always loved to hike and camp and spent many nights camping throughout much of the western United States. All of Mona’s early camping experiences were in a tent with sleeping bags on an air mattress. One could say she had literally seen America “from the ground up.” In later years, she and Mel “graduated” to a fifth wheel trailer and they were often on the road, especially during the coldest portion of the Cache Valley winters. During their retirement, they also developed recreational property on the Cub River in Idaho, where their family enjoyed many days on the river and nights around the campfire. Mona was a lifelong member of the Church of Jesus Christ of Latter Days Saints, and served in many different LDS church positions during her life. She was a gifted seamstress, wonderful cook, and kept a lovely and immaculate home. Her model of service, love, and sincere interest in all people was a living example and legacy to her family. She is survived by her children, Christine Laird and Ralph (Lyn) Bair, both of Logan, along with 4 grandchildren, and 5 great grandchildren. A special thanks to the Dry Canyon Ward, Legacy House of Logan, and Dr. Michael J. Stones, MD, for their constant concern and care for Mona’s health and well-being. Services are under the direction of the Nelson Funeral Home, 162 E 400 N, Logan. Friends my visit with the family at the funeral home on Friday, 08 April, from 6 to 8 PM. Graveside services will take place at the Logan, UT Cemetery on Saturday, 09 April at 2:30 PM.

Cache Valley lost one of the most congenial of the public when Mona K. Bair left this life on 06 April 2016. Mona lived the majority of her life in Logan, and passed away at Logan Regional Hospital of causes incident to her almost 97 years... View Obituary & Service Information

The family of Mona Kastli Bair created this Life Tributes page to make it easy to share your memories.

Cache Valley lost one of the most congenial of the public when...