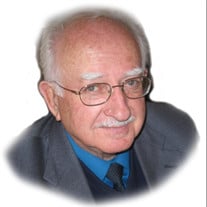 Monte H Freeman, 88, of Logan, died peacefully on Thanksgiving Day after a long fight with cancer with his loving wife of 69 years by his side. Monte was born in Logan on May 9, 1930 to Lionel (Onie) and Laura Freeman. He grew up in Logan along with three brothers; Jack, Dixon and Larry. He attended Logan City schools, later graduating from Logan High School as well as Logan Seminary. At the age of 18, Monte joined the National Guard. A short year later, he married his high school sweetheart, Roma Thomson, in the Logan Temple. Another short year later, Monte had to leave the side of his now expectant bride and was stationed in Korea where he served for a year. Upon being discharged from serving in Korea, he finally got to hold his beautiful baby girl who was six months old. While in Korea, Monte would discover two great loves. The first was his love for the gospel. He spent much of his free time reading church books and read the Book of Mormon cover to cover for the first time. It was here that he truly gained his own testimony. The second was his interest for cutting hair. In his down time, Monte read a barbering textbook that was sent from home and would practice cutting a few mens’ hair in his company. It was here that he decided that barbering would be his chosen career path. Upon returning from Korea, Monte worked at the Ogden Defense Depot for three months waiting for a GI bill to come through after which time Monte enrolled at Salt Lake Barber College, graduating seven months later. He barbered in several different locations in Logan. When he was forced to move from his last shop, he was not quite ready to retire so he said, “If Logan City will give me a license, I would like to cut hair in the garage.” They did and he did for over 10 years. Due to his failing health, Monte closed his barber shop on July 20, 2017 at age 87. He liked to tell the story of how when he started cutting hair back in 1952, the men would pay $3.75 for a haircut. When he retired 65 years later, he was charging $12.00 for a haircut. Throughout his life, Monte found enjoyment in the simple things. He loved how the world looked while he was outside. He enjoyed fishing, camping with family, washing his car (which he did often) and golfing. Because of his love for being outside, he spent many hours searching for stray balls at the golf course and loved to show his grandkids all that he had collected. But he went a step further by letting the grandkids take a ball or two of their own. On any given day, Monte could be seen riding his bike for miles through the streets of Logan. Another hobby of Monte’s was bowling. At the young age of 10, he began working alongside his father in a bowling alley. He spent countless hours setting pins and returning balls. Later on, Monte would be part of a bowling team (with father and brothers) known as the Bowling Freemans of Northern Utah. Monte had a special love for the gospel. Throughout his life, he had many positions in the church ranging from ward clerk to executive secretary for Cache Stake. His wife, Roma, proudly recounts how Monte was somewhat of a home teacher extraordinaire, always making sure that his families were visited each and every month and that he assisted them in any way he could. Monte often commented, “Life is good.” Although Monte excelled at everything he did from becoming the Logan City grade school marble champion while in the 5th grade to his lengthy career in barbering to his countless positions held in the gospel, his greatest accomplishment was his family. His children are: Kathy (Glen) Crosby, Lori (Reid) Geddes, Vicky Lynn (Steve) Goodwin, Christine (Scott) Elwood and Lonnie Mont (Beth) Freeman. He has 18 grandchildren and 31 great grandchildren, all of whom could tell you countless stories of how he took the time to make each and every one feel like there was no one more special in the world than they were. Although he is no longer physically with us, his memory will forever live on in our hearts. Monte was preceded in death by his parents, two of his brothers, Jack and Larry, as well as his eldest daughter, Kathy. Viewings and funeral services for Monte will be carried out by Nelson Mortuary. There will be a viewing Wednesday, November 28th from 6:00 to 8:00 PM as well as Thursday, November 29th from 9:30 to 10:30 AM with funeral services at 11:00 AM. Interment will be in the Richmond, Utah Cemetery. Family requests no strong fragrances be worn. The family would like to express a heartfelt thanks to Dr. Callister, Dr. “S” and Dr. Stones. Also, the Hospice team, Gabby and Cameron. In lieu of flowers, the family would request donations to the LDS Mission Fund or Humanitarian Fund.

Monte H Freeman, 88, of Logan, died peacefully on Thanksgiving Day after a long fight with cancer with his loving wife of 69 years by his side. Monte was born in Logan on May 9, 1930 to Lionel (Onie) and Laura Freeman. He grew up in Logan... View Obituary & Service Information

The family of Monte H Freeman created this Life Tributes page to make it easy to share your memories.

Send flowers to the Freeman family.