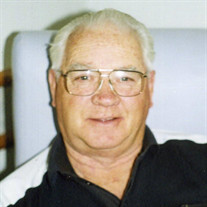 Morris DeMont Brough, 87, passed away at his home in Smithfield. He was born in Lyman ,WY on Feb. 1, 1929 to Thomas James and Julia Slagowski Brough, the 10th of 11 children. He grew up helping his father on the experimental farm, cottonwood corrals and developing the flats. He graduated from Lyman High School. He served in the Air Force as ACFC gunner on B-29’s during the Korean war. He met his wife Virginia Ann Thackeray at his mother’s home while she was renting a room from her. They were married June 7, 1954, in the Salt Lake City LDS Temple. He graduated from the Utah State Agricultural College with a bachelor’s in Industrial Arts & Education. He taught industrial arts, coached various sports and was a principal in Wyoming before retiring from teaching. He managed a Western Auto store in Washington for 5 year. He moved to Preston, Idaho and became the foreman at the Physical Facilities Plant at USU, retiring from there in 1988. He served in various church callings and also as a temple worker. After receiving a heart transplant in 1989 he kept himself busy with yard work, ceramics and woodwork. Morris is survived by his children; Julia Griggs, Pocatello, Idaho; Brenda (Dan) Kauer, Rexburg, Idaho; Sandra (Bob) Petroff, Bountiful, Utah; Lana (Mike) Hansen, Smithfield; Michael (Regina) Brough, Philippines; 24 grandchildren & 41 great grandchildren. His sisters Ursel Roundy, & Beverly Campbell, sister-in-law Betty Brough. He was preceded in death by his eternal companion, Virginia Ann Thackeray, his son Morris Mark, three brothers and five sisters and two grandchildren. Funeral services will be held Friday April 15, 2016 at 11a.m. at the Smithfield 1st ward chapel, 97 E 200 S Smithfield. A viewing will be held Friday from 9:30-10:30 at the church house. Internment will be in the Smithfield City Cemetery. The family would like to thank the staff at the Logan Regional Hospital Dialyses center for their many years of care given to him.

Morris DeMont Brough, 87, passed away at his home in Smithfield. He was born in Lyman ,WY on Feb. 1, 1929 to Thomas James and Julia Slagowski Brough, the 10th of 11 children. He grew up helping his father on the experimental farm, cottonwood... View Obituary & Service Information

The family of Morris Brough created this Life Tributes page to make it easy to share your memories.

Morris DeMont Brough, 87, passed away at his home in Smithfield....

Send flowers to the Brough family.