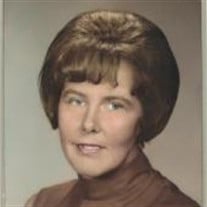 Murialon "Lon" N. Bradford Bower, 85, of Harrah, OK, beloved Mother, Sister, Grandmother, Great-Grandmother, Aunt left this life on September 29, 2018. Murialon was born January 23, 1933 in American Falls, Idaho to Floyd Henry and Aileen (Nielsen) Bradford. She graduated from Logan High in 1951. She worked in the food service industry as a cook for many years. She loved gardening and loved her flowers especially her iris being her favorite. She loved baking bread for the Relief Society at her church. Murialon was a member of the Church of Jesus Christ of Latter-Day Saints. Murialon was a member of the Daughters of the American Revolution and also belonged to the Air Force Enlisted Spouses Association. She was preceded in death by her parents and brother, Allen Bradford and sister, Isabella Bradford. She is survived by one daughter; Cindy Hart of Harrah, three sons; Bill (LeeAnn) Partington of West Valley, Utah and Bill Bower and Steven Bower both of Logan, Utah; three sisters; Ruth Winward of Kaysville, Utah, Vayle (Joe) Rubalcava of Nephi, Utah and Alice Bradford of Hyrum, Utah; five Grandchildren Eric (Afina) Hart, Nolan Hart, Savannah Hart Carpio-Rice, Maria Bower and Mathew Bower and one Great Grandchild Noah Wight. She was also survived by 2 nephews and 3 nieces. Funeral Services honoring her life will be held Saturday, October 6, 2018 at Nelson Funeral Home, 162 East 400 North, Logan at 12:00 noon. Friends may call on Saturday from 10:30 to 11:30 a.m. Interment will follow at Franklin Cemetery in Franklin, ID.

The family of Murialon Bradford Bower created this Life Tributes page to make it easy to share your memories.

Send flowers to the Bower family.