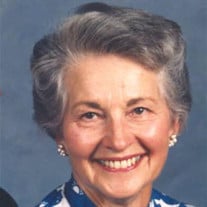 On March 9th, Mom "slipped the surly bonds of earth" and dashed along the yondering path to meet her forever sweetheart. Dad would have commented that he was "awash in Stygian Darkness awaiting her arrival." Mom was born in 1920 to William Vernon and Anna Laura Weaver Burroughs. The fifth of six children, she grew up in Arkansas. She persevered through the difficulties of the depression years and of being shunted between relatives in Montana and California. It was in California where a swashbuckling sailor caught her eye and in 1938 married Lemuel Rice Earl. They were later sealed in the Logan LDS Temple in 1959. In 1940 after the birth of Lemuel R.(L.R.), Jr., they moved to Fielding, UTI where they set up home in the Earl family mercantile business. Soon after Dennis Roland came along in 1941, Dad was off to the War in the Pacific, leaving Mom to care for their two boys and help in the store. In 1948, the family removed again to another store in Mendon, UT and settled in for the next 37 years. It was during this time in 1951 that Mom finally got her little girl, Nana Elyse. In 1985, she and Dad once again pulled up and moved with their son L.R. and daughter-in-law Yvonne to River Heights, UT. A few years after Dad passed away in 2002, Mom decided to relocate to Hyrum, UT to be with her daughter Elyse. Here she spent her twilight years under Elyse's tender care before moving on up the trail to meet Dad. She is survived by her children, L.R. (Yvonne) River Heights, UT, Dennis (Diane) Hyrum, UT and Elyse Christensen, Hyrum, UT; twelve grandchildren, eighteen great grandchildren and seven great, great grandchildren. Mom was a master seamstress, skilled in the kitchen and an avid genealogist, having researched thousands of names. We expect she is now connecting with many of those ancestors. Mom served in various church capacities, including Relief Society, Primary and Young Women. Mom and Dad served LDS missions in North Carolina and Maine and officiated for many years in the Logan LDS Temple. Her unselfish placement of others needs above her own brightened many lives in uncountable ways. We miss you already Mom. Funeral services will be on March 19th at 12 noon in Nelson Funeral Home, 162 E 400 N, Logan, UT. A viewing will be held Sunday from 6-8pm at Nelson's and prior to service 10:30 - 11:30am. Interment will be in the Mendon Cemetery.

On March 9th, Mom "slipped the surly bonds of earth" and dashed along the yondering path to meet her forever sweetheart. Dad would have commented that he was "awash in Stygian Darkness awaiting her arrival." Mom was born in 1920 to William... View Obituary & Service Information

The family of Nana Burroughs Earl created this Life Tributes page to make it easy to share your memories.

On March 9th, Mom &quot;slipped the surly bonds of earth&quot; and dashed...

Send flowers to the Earl family.