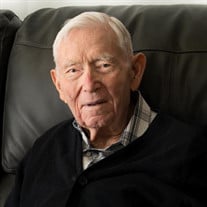 Ned Taylor Low, 91, of Smithfield, passed away October 30, 2020. Ned was born April 17, 1929, in Smithfield, son of William Lorin and Vilate Hancey Low. He grew up in Smithfield with two sisters, Afton and Ellen and two brothers, Budd and Charles. Dad attended schools in Cache County where he met Diane Elwood at a school dance and they married on May 4, 1950, in the Logan temple of The Church of Jesus Christ of Latter-day Saints. After a year of marriage they bought their home in Smithfield. Dad and Mom raised five children and taught them many lessons; love and respect for others, service, and hard work. He always enjoyed visits from the grandchildren, great-grandchildren and loved to support them in their activities. He shared his big bowl of popcorn with lots of butter and a sip of Pepsi when they visited. The candy dish was always available in the bedroom. Dad had many interests, he enjoyed hunting, fishing, and traveling in the trailer. He didn’t watch a lot of TV but found the time to watch the Utah Jazz, Judge Judy and American Pickers. Many summer nights were filled watching Blue Sox baseball and eating a Lion Pup. He was happy to serve on the Board of Directors for many many years. Ned was a hard worker, having several jobs at one time. He worked as a butcher at Horlachers, which came in handy after his hunting adventures. At Del Monte in the can making area and as a custodian at Summit Elementary School where he made many life-long friends with teachers, staff and was well known by many students as “Mr. Low.” Mostly he considered himself a farmer. He worked his own land and also did custom work for others in the area. He is a member of The Church of Jesus Christ of Latter-day Saints where he held many callings including his favorite, Ward Clerk under Bishop Gib Duncan. He is survived by his children: Karen Low, Logan, Janet (David) Traveller, Farmington, Robert (Brenda), Smithfield, Lisa Bray, Smithfield, Mark (Colleen), Smithfield; 12 grandchildren, and 23 great-grandchildren with one due in December; two sister-in-laws, Myrna Low and Fern Jeppesen. He was preceded in death by his wife, Diane, his parents, his in-laws, his siblings, two brother-in-laws, and one sister-in-law. We would like to express our thanks to the nurses, aides and therapists at Maple Springs and IHC Hospice for the kind care provided to Dad. A viewing will be held Thursday, November 5, 2020, from 11:30 a.m. to 12:30 p.m. at the Nelson Funeral Home in Smithfield, 85 South Main. Graveside services will be held at 1:00 p.m. at the Smithfield City Cemetery. Show that you care, please wear a mask.

Ned Taylor Low, 91, of Smithfield, passed away October 30, 2020. Ned was born April 17, 1929, in Smithfield, son of William Lorin and Vilate Hancey Low. He grew up in Smithfield with two sisters, Afton and Ellen and two brothers, Budd and Charles.... View Obituary & Service Information

The family of Ned Taylor Low created this Life Tributes page to make it easy to share your memories.

Send flowers to the Low family.