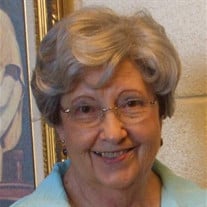 Nelda Cowan Haws Owen, of Lewiston, Utah, died February 21, 2015 at the McKay-Dee Hospital in Ogden, Utah. She was born March 6, 1930, in Spring Lake, Utah, to George Marlin “Mike” Cowan & Viola Celia Butler. She was the second of six children; Frank, Nelda, Zola, Dan, Marion, Michael. She grew up in Spring Lake, attending school there and then in Payson where she graduated from high school in 1948. She was active in 4-H, FHA and LDS Mutual Improvement Association. She won a trip to Chicago in 1949 for her 4-H project. She assisted her father in building onto their home in Spring Lake and she also built a dressing table for herself. After high school graduation, she moved to Provo where she worked at Barbazon Sewing Plant. In 1951, while working at the courthouse in Provo, Nelda met Grant Henry Haws. He asked her to accompany him as a chaperone for an upcoming high school prom, however before the prom he asked her to go ice skating. So they actually went their second date before their first. Less than two months later, on June 8, 1951, Nelda and Grant were married in the Salt Lake LDS Temple. Eight children were born to them: Julie, Kim, Dan, Gary, Mark, Sally, Rick, & Marlin. The family lived in Utah, Washington, and Idaho. In 1962 they bought a dairy farm in Richfield, Idaho. They worked the farm together and Nelda also drove the school bus. Many times in the winter she was out "plowing" the roads with the school bus before the snow plows were out. Due to Grant's health problems with his heart, they sold the dairy farm and moved back to Spring Lake, Utah in 1972. Grant died in 1975. Nelda married again and lived in Northwestern Montana until that marriage ended in 1982. She and the younger children lived for six years without running water, a telephone, or TV. During this time, Nelda was the LDS Relief Society President in the Thompson Falls Branch. The Branch covered an area about 150 miles long and she did it with no telephone. After living briefly in Rexburg, Idaho, Nelda met Garold Earl Owen. They were married October 7, 1983, and she moved with him to Lewiston, Utah. Nelda and Garold had many opportunities to travel to many places. They also enjoyed fishing and spent many hours at the various lakes and reservoirs around the state. Nelda worked at ZBag Sewing Plant for many years before retiring about 1995. Nelda and Garold spent 19 years together before Garold died in 2002. Nelda was an active member of the LDS Church serving as a music director in every ward or branch she lived in. She was also an active member of the DUP. Nelda was a two times survivor of breast cancer. Because of declining health in 2011, she lived at Sunrise Assisted Living in Lewiston for a few months. She then lived with one of her daughters for a year, before returning to her own home in 2013. Nelda was always known for her smile and for being friendly to everyone. Nelda is survived by her children: Julie Haws, Kim & George Orr, Dan & Kathie Haws, Gary & Charie Haws, Mark & JoAnne Haws, Sally Haws, Rick & Beth Haws, and Marlin Haws; step-children: Phyllis & Marcelino Martinez, Bill & Ronna Smith, Rick & Suzy Owen, DeAnna & Jose Olano, Jackie & Tom Price; 19 grandchildren; 11 step-grandchildren; over 40 great-grandchildren and step-great-grandchildren; sisters Zola (Johan) VanZeben, & Marion Searle. She was preceded in death by her parents, two husbands, two granddaughters, a great-granddaughter; three brothers: Frank, Dan & Michael Cowan; a step-son and his wife; and one step-grandson. A funeral will be held Friday, Feb. 27, at 1 pm, at Lewiston 1st Ward, 10 S 1600 W Lewiston, Utah. Viewings: Thursday, Feb. 26, 6-8 pm, at the church, and 11:30 am-12:30 pm on Friday. A second service will be held Feb. 28, at 11 am, at Spring Lake Ward, 12625 Spring Lake Road, Payson, Utah, with a viewing 9:30-10:30 am. Burial will be in the Payson Cemetery, Payson, Utah. In lieu of flowers, please make a donation to a Breast Cancer Society, a Macular Degeneration Society, or a charity of your choice in Nelda’s name.

The family of Nelda Cowan Haws Owen created this Life Tributes page to make it easy to share your memories.

Send flowers to the Owen family.