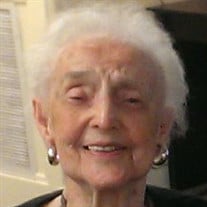 Norma Petersen Watts, 99, passed away on Thursday, February 18, 2016, at her daughter’s home in Clinton, Utah. Norma was born on September 30, 1916, at her grandfather’s home in Benson, Cache, Utah, the daughter of Silvin Petersen and Edna Ann Rogers Petersen. The oldest of five children, she is survived by her youngest sister Edna Mae Thomson. On November 22, 1939, she married Ferry J Watts in the Logan LDS temple. Growing up on a farm she learned to work hard at an early age. She enjoyed hunting and fishing; many stories of such adventures have been enjoyed by her children, grandchildren and great grandchildren. She was an avid horse woman, and her skills gave her opportunity to compete with her horses in pleasure classes where she received awards and honors. She attended Benson Elementary, Smithfield Jr. High School, and graduated from North Cache High School. Visiting teaching became one her joys as she became friends with some very special people in her life. She often talked of the opportunity she had to teach some very lovely girls in her Jr. Gleaner class. Her work consisted of helping with the school lunch program at the Smithfield Elementary and Jr. High Schools, and then as a dental assistant for some 30 years. While working there she was president of the First District Dental Assistants Society for two years. She also served as the North District Chairman of the March of Dimes in the Cache Valley area. Norma had a love of gardening and took great pride in a well-kept yard and garden, even being recognized by the mayor for the commitment, energy and time that she gave in the upkeep of it. She pursued that commitment until the age of 94, and then still gave direction. Her family called her the “Energizer Bunny”—she just kept on going. She loved preparing meals and treats for her family and friends. Her family loved coming to her home for Thanksgiving and Christmas. She was noted for her culinary skills which she had learned from working for and serving several celebrated residents of Salt Lake City and Logan before her marriage. Norma and Ferry were blessed with three children: LeiMomi Jean Gardiner (Errol, deceased) of Clinton UT, Robert Jackson (Elaine Peart) of Farmington UT, and Marcia Ann Ah Mu (William) of Price UT. In addition, her posterity includes: 14 grandchildren, 41 great grandchildren, and 3 great great grandsons. She was preceded in death by her husband, her parents, her siblings, Maxine, Silvin LaMoyle, and Darrell. She was a widow for over 21 years. The family would like to thank her neighbors for their kind help in her later years, those at Country Care and Symbii Hospice. We grew to love them all and will forever be grateful for their service to our mother. The memorial service will be held at 11:00 a.m.Thursday, Feb. 25, 2016 in the Smithfield First Ward, 79 East 200 South, Smithfield UT, with a viewing held prior to the service from 9:00 a.m. to 10:45 a.m. Thank you to Nelson Funeral Home for the arrangements and to the Relief Society and others of the Smithfield First Ward who have prepared for this memorial service.

The family of Norma Petersen Watts created this Life Tributes page to make it easy to share your memories.

Send flowers to the Watts family.