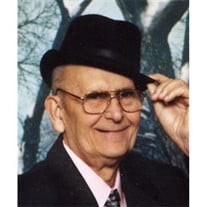 Norman Pratt Elwood, born January 1, 1934 in Smithfield, Utah to Rosel Heber Elwood and Myrel Leone Bingham Elwood, passed away August 17, 2009 quietly at his home in Franklin, Idaho. Norm was preceded in death by a son, Thomas; his parents, 2 sisters: Myrel Rich and one unnamed; four brothers: Dale, Eugene, Kenneth and Mervin Elwood. He is survived by one brother, Russell Elwood of Smithfield. He is also survived by his wife, Karen E Harris Elwood of Franklin. He has 6 children and their spouses, 5 step-children and their spouses and 1 step-child not married, 40 grandchildren and 3 great-grandchildren. Norm grew up in Smithfield attending Summit Elementary School, Smithfield Junior High School, and North Cache High School, graduating in 1952. His favorite classes in school were wood shop and mechanical metal shop, which directed him to do the kind of work he enjoyed ? building things, remodeling homes, mechanical work, and electrical work. After high school, he worked for the Hunting Glass Company for 4 years. He worked for a number of farmers, picking beans, hauling hay and such. He worked at the Del Monte plant in Smithfield, and worked for Amalgamated Sugar Company in Lewiston. In the 60?s he owned and operated the Utes Dairy Company in Smithfield. He worked for Hill Electric, wiring new homes. He earned the Gold Medallion award from Utah Power Company in wiring one of the first home that he did. He started his own TV antenna installation company in 1953 called ?Monkey Business?. He worked for Thiokol, building the Track Master Snow machines for 8 years. He later worked for the LDS church as a Maintenance Manager for the Smithfield Utah Stake Center until 1985. He has been a member of the LDS church all of his life. He served in the MIA presidency and was also a Temple coordinator with his wife in his previous Smithfield ward. He worked in the scouting program and became one of the first Utah Hunter Safety and Survival instructors in the state. He and his wife enjoyed working with the Webelos. His expertise in woodworking and knowledge in many areas was able to give the boys something to work for. He seemed to make everything fun, even though it was work. He met and married Karen E Harris on November 28, 1987, and they were sealed December 10, 1988. She had 6 children that he helped to raise, along with his last child. He thoroughly loved raising 7 teenagers and having them in his home all at the same time. That?s how he lost his hair?so he said. He and Karen both loved the outdoors, hunting and fishing with his wife, children and grandchildren. He always said that they went fishing together, but Karen went catching! He loved hunting and he was the best shot, not wasting any meat by hitting the animal in the head. Norm loved to help the older folks in town by shoveling snow off of their roofs or just talking and visiting with them. He said ?I?d rather give flowers to folks while they are alive and can enjoy them than wait and give them to them after they are dead.? Those of you who knew Norm knew the sense of humor that he had. This has been the way he?s been all of his life. He loved to pull practical jokes on anyone and everyone. He even kept the hospice nurses and aides on their toes. Their blood pressure was always higher than his. Even just before he passed on, he was teasing the nurse that had come just a half hour before. He?s always loved his dogs ever since he was young, and has enjoyed the last three poodles that he?s had. They knew when he was sick even before he did. Peppie, our black poodle never left his side the day he was so ill. They?ve been great companions and friends. Most people don?t get to write their own obituary, but Norm had lots of time to think about this since his last heart attack and strokes in 2007. In his words, ?I just would like to thank all of you who are my friends and have helped in taking care of me in the past few years, especially those brethren who have sat with me so my wife could have time out for herself. Everyone needs good friends, and I have made many and I thank you again and appreciate all you have done for my family.? Funeral services will be held at 11:00 a.m. Thursday, August 20, 2009 at the Cub River Ward Chapel, 5307 East Cub River Road, Preston, Idaho. Friends and family may call Wednesday evening from 6 to 8 p.m. at Nelson Funeral Home, 85 South Main, Smithfield and Friday morning from 9:30 to 10:30 a.m. at the church prior to services. Interment will be in the Franklin City Cemetery, Franklin, Idaho. Condolences may be extended to the family online at www.nelsonfuneralhome.com.

The family of Norman Pratt Elwood created this Life Tributes page to make it easy to share your memories.

Send flowers to the Elwood family.