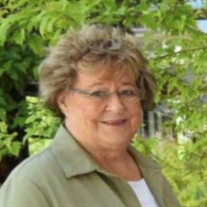 Odean Gittins McCann, age 82, passed away on April 10, 2021, in Farr West, UT. She was the born the 12th child of 13 children to Thomas Henry Gittins and Katie Louise Stone. She was born on November 24, 1938. She spent her younger years in Lewiston Utah. She worked on the family farm topping sugar beets and then in the home learning to quilt, cook, and can food. They did not have a car, so she drove the tractor to church on Sundays. She spent many happy times with her brothers and sisters. Once Odean graduated from high school, she and her good friend, Esther Ann, went to Salt Lake City and found a place to live and jobs all in one day. There she worked for The Church of Jesus Christ of Latter-day Saints as a secretary. On a blind date she met her future husband, Marc LaVar McCann. They were later married in the Logan Temple on May 5, 1960. They started their life in Portage, UT, and then later moved to Hyde Park, UT, where she was the first PTA President at North Park Elementary. Later they built their life-long house in Smithfield, UT, where they spent the majority of their years. Odean worked as a secretary for the David O. McKay Student Living Center on USU Campus in Logan and later as an administrative assistant/office manager for many years for Nixon & Nixon, Inc. With these two jobs combined, she worked with Jack Nixon for 47 years. They developed a strong friendship over these years. She was highly proficient in typing, shorthand, and could manage any situation with finesse. She enjoyed her work and worked well into her seventies. Odean was known for her fun personality, contagious laugh, and was a giving friend to everyone she met. She was a member of The Church of Jesus Christ of Latter-day Saints and served in various callings where she developed many lifelong friendships. She enjoyed many years with her friends playing cards and going to lunch. The one thing she enjoyed most was her family. She, with her family, made many memories participating in various activities including camping, traveling, hiking, playing games, and family parties. Her grandkids will fondly remember her Easter egg hunts, Halloween parties, Christmases, and themed reunions. Traditions were her specialty and she was the life of the party. Odean is survived by: her 5 daughters - Sandy Starkey, Murray, UT; Leona (Jerry) Goodsell, Hyde Park, UT; and Pamela (Kerry) Anderson, Hyde Park, UT; Lisa (Jim) Rock, Nibley, UT; and Lynette (David) Jenkins, North Logan, UT; as well as 18 grandchildren; 34 great-grandchildren; and her twin brother, Odell (Joy) Gittins, Burley, ID. She is preceded in death by her husband, LaVar; son-in-law, Larry Starkey; parents; and 11 brothers and sisters. Funeral services will be held Wednesday, April 14, 2021 at 12 noon in the Smithfield 25th Ward Chapel, 660 West 200 North, Smithfield. Friends may call Tuesday evening at Nelson Funeral Home, 85 South Main, Smithfield from 6 to 8 p.m. and at the church on Wednesday from 10:30 to 11:30 a.m. Interment will be in the Smithfield City Cemetery. Friends and family can attend the funeral in person or watch virtually through the Zoom link: https://conservice.zoom.us/j/3770546081?pwd=N21vWW5lbWxMT3BTRkk1ZVc1SkVZdz09

Odean Gittins McCann, age 82, passed away on April 10, 2021, in Farr West, UT. She was the born the 12th child of 13 children to Thomas Henry Gittins and Katie Louise Stone. She was born on November 24, 1938. She spent her younger years in... View Obituary & Service Information

The family of Odean Gittins McCann created this Life Tributes page to make it easy to share your memories.

Send flowers to the McCann family.