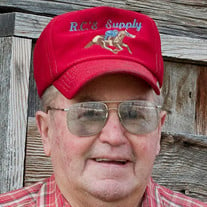 On Saturday March 21,2015, Parley Lewis Pitcher passed away with his wife and children by his side. Lewie was born April 27, 1936 in Logan, Utah to Leo Mikkelsen Pitcher and Marie Petty Pitcher. He was the oldest of five children. He graduated from North Cache High School. Lewie married his high school sweetheart Mary Lee Sanders on November 7, 1955. They lived all their married life in Smithfield, where they raised their six children. At an early age Lewie developed a love for horses which occupied much of his life. He was the President of the Summit Saddler Riding Club. He trained and raced chariot horses with two generations of family. He was president of the Skyline Cutter Association. Lewie could always be found in the middle of the action at the Horse Pulls throughout Utah & Idaho. His early careers involved Cantwell Bros Lumber, Tri Miller and Hod Carrier on a brick crew. For 30 years he worked for the Cache County Road Department. After retirement Lewie helped his father & brother on the farm. For over 30 years Lewie's life was spent serving young boys as a baseball & football coach. He was instrumental in bringing Little League football to Smithfield, originally running it out of his shed. He coached baseball teams from Little League to American Legion. In 2012 he was awarded Smithfield Citizen of the year. A large part of Lewie's life was spent as a very regular customer at the coffee shop. He was a classic tease and gave all the girls employed there nicknames. He loved his association with his coffee shop buddies. In his later years Lewie spent every day he could riding the mountains in Logan Canyon. His grandchildren will never forget days spent in the mountain with grandpa where he knew the trails by heart. He even guided 4H groups on the trails. Lewie's grandchildren were the light of his life. Lewis is survived by his wife Mary Lee, two daughters Susan Mathews (Curt), Dixie Blair (Mark), three sons Jay Pitcher (Terri), Todd Pitcher, Yancey Pitcher (Cindy); daughter-in-law, Erin Simpson; 18grandchildren and 14 great- grandchildren. Lewie was preceded in death by his mother and father; in-laws Holger and Veda Sanders; and his son Scott. Funeral Services will be held Thursday, March 26,2015 at 12:30 at the Smithfield South Stake Center 451 S. 250 E. Smithfield, Utah. A viewing will be held Wednesday 6-8 pm, at the Stake Center, and on Thursday from 10:30-12.00, prior to the services at the Stake Center. Interment will be in the Smithfield City Cemetery. Thank you to those who cared for Lewie at his home Benji, Tim, Mark, Bonnie and Diane. A special thanks to Devin & Jordan Dockstader for their loving care. Condolences and memories may be shared with the family on line at www.nelsonfuneralhome.com

On Saturday March 21,2015, Parley Lewis Pitcher passed away with his wife and children by his side. Lewie was born April 27, 1936 in Logan, Utah to Leo Mikkelsen Pitcher and Marie Petty Pitcher. He was the oldest of five children. He graduated... View Obituary & Service Information

The family of Parley Lewis Pitcher created this Life Tributes page to make it easy to share your memories.

On Saturday March 21,2015, Parley Lewis Pitcher passed away with...

Send flowers to the Pitcher family.