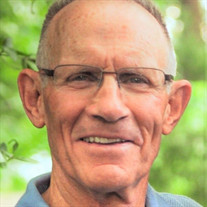 Jerry Patrick “Pat” McGrew, 80, returned home to his Savior on July 25, 2019, having died in the arms of Marlys, his beloved wife of 56 years. An identical twin and the youngest of five boys, Pat was born December 10, 1938, in Sioux Rapids, Iowa, to parents John Frank and Eva Mae Craig McGrew. He graduated Valedictorian from Rembrandt Consolidated School in 1957 where he excelled in basketball, baseball, and band. He met his “forever sweetheart,” Marlys, after moving to Southern California and married her in 1962 while on leave from the United States Army. Following his post at Fort Lewis in Washington, they returned home to California where, while attending California Baptist College in Riverside, Pat worked full time and played catcher for the varsity baseball team. He was a member of Alpha Chi Honor Society and achieved the distinction of Magna Cum Laude upon his graduation in 1966 with a degree in Business Administration and Accounting. Pat began his career at California Baptist College, where he was promoted to Vice President of Business and Finance. In 1980, he moved with his wife and two children to Logan, Utah, where he worked for 20 years in the Controller’s Office of Utah State University. Never one to sit still, Pat continued working in retirement, with positions at Macey’s grocery and Salt Lake Express Shuttle, where he enjoyed meeting and interacting with people. Pat was an avid gardener, taking great pride in his yard and flower garden, and often helping others with theirs. Other interests included classic cars, racquetball, traveling, time spent in the canyons surrounding Logan, and doting on his grandchildren. He had a great sense of humor sprinkled with sarcasm, could be a little stubborn, and never did anything half way. He was devoted to God, his family and his friends, always showing up to serve where needed. He was church Treasurer for nearly 40 years, a position in which he was honored to serve. In addition to his wife, Marlys, Pat is survived by his daughters, Suzanne (David) Stone, and Amy (Ray) Strong; grandchildren, A.J., Tyler, Sierra and Juliet; two brothers, William O. (Eleanor Philipp) McGrew and his twin, T. Michael (Cynthia Webster) McGrew; and sisters-in-law Delores Odor McGrew and Darlene Johnson McGrew. He was preceded in death by his parents and brothers, John F. and Larry C. McGrew. Thank you to Drs. Jason Hunt and John Weiss and their medical teams at Huntsman Cancer Institute, and to nurses Katie and Bonnie of Intermountain Homecare & Hospice for their devoted care and compassion shown to Pat and his family. Also, many thanks to the family and friends who have walked alongside Pat and Marlys and supported the family in prayer and service. Words cannot express the extent of our gratitude for each one of you in our lives. All who knew and loved Pat are invited to attend a celebration of his life to be held Sunday, August 11, 2019, at 4:00 pm at Emmanuel Baptist Church, 310 North 800 East in Hyrum, Utah. A light meal will be served following the celebration. In lieu of flowers, please consider donating in Pat’s memory to either Emmanuel Baptist Church or the Huntsman Cancer Institute.

The family of Pat McGrew created this Life Tributes page to make it easy to share your memories.

Jerry Patrick “Pat” McGrew, 80, returned home to his Savior on...

Send flowers to the McGrew family.