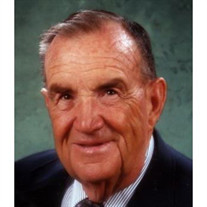 Paul Holt Jensen passed away peacefully at his home in Trenton Utah, on August 10, 2009. Paul was born in Trenton on Oct. 15, 1928. He was the second of five boys born to Julius P. and Fern Holt Jensen. He lived in Trenton his entire life except for the two years that he spent in the military. He grew up on the family farm in Trenton, where he developed his lifelong love of farming and the outdoors. He went to elementary school in the old four room school house in Trenton, attended junior high school in Lewiston, and then graduated from North Cache High School in Richmond and attended Utah State Agricultural College USU where he studied diesel mechanics and welding. He was drafted into the US Army in 1950 and served two years in the 4th division in Germany. He returned to Trenton in 1952, and worked on the family farm while attending UAC. He married Jalaine Jensen in the Logan LDS temple on June 29, 1953. He worked as a diesel mechanic for Fuhriman Implement and Harris Truck and Equipment. Then he worked as a carpenter for Fuhriman Construction Company, and, for many years, for Darryl W. Anderson Construction, and retired in 1993. He was active in his community, and served for four years on the Trenton town council, and was mayor of Trenton for twelve years. He was also a member of the bishopric in Trenton and a member of the Benson Stake Sunday School board. Paul owned and operated a farm in Trenton, which was dear to his heart. He raised Scottish Highland cattle and was very proud of the sought after potatoes he raised on his farm. He greatly loved farming until failing health forced him to retire. He was a wonderful husband, father and grandfather and enjoyed spending time with his family. He enjoyed camping and fishing. He is survived by his wife, Jalaine Pitcher Jensen of Trenton; daughter Paula Val Goodfellow of Encinitas, CA; grandsons, Ian Goodfellow of Palo Alto, CA, and Isaac Goodfellow of Encinitas, CA; brothers Scott Kathleen Jensen of Taylorsville, Utah, and William R. Sylvia Jensen of Logan, Utah; sister-in-law, Pearl Jensen of Ogden, Utah; and by his aunt, Lona Glover Holt of Lewiston. He was preceded in death by his parents and his brothers, Wayne and Joe. A viewing will be held from 6 to 8 p.m. Friday, Aug. 14, at Nelson Funeral Home, 85 South Main in Smithfield, Utah. Funeral services are at 11 a.m. Saturday, August 15, at the Trenton ward, 1200 North 400 West in Trenton, Bishop Rob Smith presiding. There will a viewing from 9:30 to 10:30 a.m. at the church. Interment will be at the Trenton Cemetery. Condolences may be shared with the family at www.nelsonfuneralhome.com. The family wishes to thank Community Nursing Services for their kind care, especially Christian, James, Vonda, Raymond, Todd, and volunteer Janey, and Dr. Timothy Costa, and our kind neighbors, LuDell, Thayne, Cory and Stephanie, Rita and Arlene, Reatha and Drew, and Sid.

Paul Holt Jensen passed away peacefully at his home in Trenton Utah, on August 10, 2009. Paul was born in Trenton on Oct. 15, 1928. He was the second of five boys born to Julius P. and Fern Holt Jensen. He lived in Trenton his entire life except... View Obituary & Service Information

The family of Paul Holt Jensen created this Life Tributes page to make it easy to share your memories.

Paul Holt Jensen passed away peacefully at his home in Trenton...