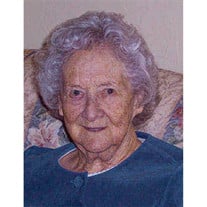 Bear River City, UT/East Berne, NY - Peggy Wise Jensen, 91, long-time resident of Bear River City, UT passed away peacefully at Our Lady of Mercy Life Center on Friday, November 26, 2010, with her family at her side. She had resided in upstate New York with her daughter and son-in-law since 2002. She was born December 20, 1918 in Corinne, Utah, a daughter of Thomas Franklin Wise and Annabelle Hammerland Wise. Peggy married Richard Teak Maurice Jensen on November 26, 1937 in Malad, Idaho. Their marriage was later solemnized in the Ogden LDS Temple. Teak passed away on January 8, 1988. Her greatest enjoyment came from her time with her family and her hobbies of reading and sewing. In earlier years she enjoyed gardening and canning, which she shared with her family and friends. Peggy was a member of the Church of Jesus Christ of Latter-day Saints and attended services at the Bear River Second Ward and the Central Bridge Ward New York. She received her associates degree in accounting from Weber State University and worked for many years at Thiokol Chemical Corporation. Peggy worked for over 25 years alongside her husband "Teak" as the accountant of their construction company in Bear River City. Surviving are her children: Carolyn Boyd Anderson of East Berne, NY and Richard Juanita Jensen of Brigham City, UT, 5 grandchildren, and 7 great-grandchildren. She is also survived by her brother: Paul, and sisters: Corinne Hunt and Bernice Page. Peggy was preceded in death by her husband, parents, her daughter: Janet Arlene Bolduc, her brother: James and her sisters: Dorothy and Irene. Funeral services will be held Wednesday, December 8, 2010 at 11:00 a.m., at the Bear River LDS Chapel, 5870 North 4700 West, Bear River City, UT. The family will receive friends and relatives at the church on Tuesday from 6:00 – 8:00 p.m. and again at 9:30 - 10:30 a.m. Wednesday morning. Interment will be in the Bear River City Cemetery.

Bear River City, UT/East Berne, NY - Peggy Wise Jensen, 91, long-time resident of Bear River City, UT passed away peacefully at Our Lady of Mercy Life Center on Friday, November 26, 2010, with her family at her side. She had resided in upstate... View Obituary & Service Information

The family of Peggy Wise Jensen created this Life Tributes page to make it easy to share your memories.