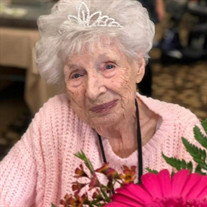 Phoebe Hazel Elliott Green Pierce finished her earthy life on March 5, 2020 at Legacy House in Logan, UT at the age of 102. Phoebe was born in IvyLog, Union co., GA on 1 November 1917 to Robert Walter Elliott and Lassie Minnie Chapman. She was the 7th child of 10. She would tell how she was the seventh daughter of the seventh daughter and so she was good luck. Although her father died when she was seven, he was a great influence in her life. Her mother worked as a seamstress to keep the family going. After her schooling, she moved to North Carolina to live with her sister and then to Avenal, CA. She was a waitress in a small diner when she met her future husband, Richard Burton Green. They were married on Dec 27, 1938 in her mother’s parlor. Dick joined the Church of Jesus Christ of Latter-Day Saints in Feb 1942. At first, Phoebe was not happy about this but decided that it was more important to worship together. She was baptized four years later in Jun of 1946. They were sealed in the LDS St. George temple on 18 April 1947. They bought their first house in Avenal, CA where Dick as Richard was called, worked for the Standard Oil Co. This is where their first son, Gary Richard Green was born. They moved to Bakersfield, CA where their second son, Timothy Elliott Green was born. Dick learned the plumbing trade and they eventually moved to Paradise, CA where they lived for over 40 years. Gary became a jeweler and moved to southern CA. They lived in Great Britain for three years while serving on a building mission for the church. It was there that she was literally called by the prophet to serve as Relief Society President. After their mission they returned to Paradise. While their son Tim was on his mission, they moved to Hawaii for seven years while Dick was employed to help build the Polynesian Cultural Center. After Tim graduated from BYU-Hawaii in 1977, they moved back to their home in Paradise. Tim became a teacher and moved to Smithfield, UT. Tim died on 17 May 1989 and Dick died on December 12, 1991. Phoebe married Carl William Pierce on August 30, 1999. They made their home in Paradise, Las Vegas, Cedar City, and Logan, UT. Carl died in March of 2012. Phoebe lived in Pioneer Valley Lodge and then in Legacy House. Phoebe was always serving others. When she saw a need, she was there to help. Resourceful, and determined, she led a life that is admired by all who met her. Her faith in her Savior never waivered. She was always on the move, whether in her house and yard or in various capacities in the church and community. She always faced her trials by doing what she could and then accepting the rest. She had a great sense of humor and a sweet disposition. She leaves behind her son, Gary (Barbara) and his five sons, Christopher Richard Green (Norma), Daniel Cameron, Marc Darren Green, Addam Elliott Green (Mary), and Sean Derek Green (Stephanie): her daughter in law Janet Green Hall (Stan), and her children, Amy Elizabeth Green Shaffer (Todd), Colby Jacob Green, Kirsten Heather Charlotte Green Smith (Eric), Alicia Lorann Hall Nielsen (Cody) and Preston James Hall. Also 18 great grandchildren, and 7 great-great grandchildren. She is preceded in death by her parents and siblings, her husband Richard Burton Green, and Carl William Pierce, her son Timothy Elliott Green and granddaughter, Shannon Morrene Green. A viewing will be from 10:30-11:30 am on Thursday, March 12 at Nelson Funeral Home (162 E 400 N) with a funeral to follow at 12 Noon in the same building. Interment will be with the Smithfield City, UT cemetery.

The family of Phoebe Hazel Elliott Green Pierce created this Life Tributes page to make it easy to share your memories.

Send flowers to the Pierce family.