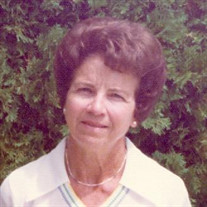 Phyllis Nelson Allsop passed away Monday, October 19, 2015, in Smithfield, UT, surrounded by her family. She was born on August 27, 1918, in Smithfield, UT, to Charles LeRoy Nelson and Florence Burgess Nelson. Phyllis married her life long companion on December 21, 1937. They celebrated more than 78 happy years together. Jack and Phillis raised three children: Terry, DeeAnn and Bob. Along with Jack, Phyllis spent many wonderful years working side-by-side as owners and operators of Jack and Bob’s Foodtown. After retiring they spent many happy years traveling with friends. Phyllis was a founding member of the Smithfield Civic Club and an active member of the Logan Golf and Country Club. She loved golf, gardening, sewing, crocheting and tending to her family. She was an immaculate house-keeper. She was a member of the LDS Church serving in several different capacities. She is survived by her husband, Jack, and children: DeeAnn Budge (Bill), and Bob (Kaye). Grandchildren: Debra Dee Gary, Justin Allsop, Colby Allsop and Chelsea Morton. She had seven great children. Phyllis was preceded in death by her parents and son, Terry; brothers and sisters: Paul, June and Dorothy. Funeral services will be held Friday, October 23, 2015 at 12 Noon in the Nelson Funeral Home Chapel, 162 East 400 North, Logan. Friends may call Thursday evening from 6 to 8 p.m. at the funeral home in Logan and also on Friday from 10:30 to 11:30 a.m. prior to services. Interment will be in the Smithfield City Cemetery. The family would like to thank Encompass Home Health and Hospice, Autum Care, and a special thanks to Tammy Ellis. Condolences may be sent to the family online at www.nelsonfuneralhome.com.

The family of Phyllis Nelson Allsop created this Life Tributes page to make it easy to share your memories.

Send flowers to the Allsop family.