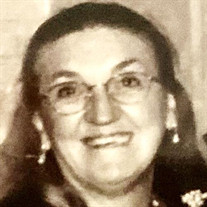 Phyllis LaRae Coley Mauchley Corbett Gonzales passed away unexpectedly at the age of 70 on December 8, 2019 at Logan Regional Hospital. She was born on February 12, 1949 in Coalville, Utah to Clifton Ray Coley and Virginia Cox Coley. She graduated from Logan High School in 1967 and later became a CNA, working for the Sunshine Terrace for many years. She loved taking care of people and helping others and always had such a beautiful smile while doing it. Phyllis married Dennis Mauchley in the Logan LDS Temple on September 19, 1969 and had 5 beautiful children. They later divorced and then she met George Corbett and was married on December 11, 1988 and was married for thirteen years before he passed away from cancer in 2001. They were later sealed for time and all eternity in the Logan LDS Temple. Phyllis was devastated after losing George and never thought she would find happiness again until she met and married Adam Gonzales on August 14, 2015. Nothing was more important to Phyllis than her children and grandchildren. She loved them more than anything in the world and was so proud of all of them. Along with her kids, she loved animals and had lots of them. She loved dogs, cats, birds, butterflies and any other animal that was cute or cuddly. She loved to garden, tend her flowers, knit and sew blankets for other people. Phyllis was a member of the Church of Jesus Christ of Latter-day Saints and had a wonderful testimony throughout her life. She said just days before her passing that all she wanted was to have her kids be happy in life. She will be missed by so many people. She is survived by her husband Adam and four children: Tammy (Hector) Popoca, Jenny (Shawn Cronquist) Lundahl, Paul (Samantha) Mauchley, Michael (Brandi) Mauchley, one sister Lana (Gordon) Childers. She was especially proud of her 15 grandchildren and 1 great-grandchild. She is preceded death by her husband George Corbett, her parents, one sister Ginny Ann Hewett, two brothers Charles Wade Coley and Clifton Roy Coley, a baby girl Jaime Lee Mauchley. Funeral services will be held on Monday, December 16, 2019 at the LDS church on 993 West 1000 South Logan, Utah. A viewing will be held that morning from 10:30 – 11:30. Burial will be in the Smithfield, Utah cemetery.

Phyllis LaRae Coley Mauchley Corbett Gonzales passed away unexpectedly at the age of 70 on December 8, 2019 at Logan Regional Hospital. She was born on February 12, 1949 in Coalville, Utah to Clifton Ray Coley and Virginia Cox Coley. She graduated... View Obituary & Service Information

The family of Phyllis Mauchley Corbett Gonzales created this Life Tributes page to make it easy to share your memories.

Send flowers to the Gonzales family.