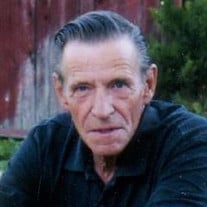 Ramon David Barber November 26th, 1931- March 7th, 2019 Ramon David Barber, 87, passed away March 7th, 2019 at the VA Hospital in Asheville NC. He was born November 26th, 1931 in Centerville, Utah. The son of Elmer and Katie Barber. Ramon grew up in Centerville Utah, graduated from Davis High School and was called to serve his country during the Korean War, in the US Army. Ramon met and married Ann VanFleet on September 17th, 1954; After living in Orem for several years they moved to Smithfield, Utah in 1960, where Ramon continued to work for the grocery and meat industry while he and Ann raised their three children. Ramon enjoyed hunting and was an avid golfer. He spent many years as a proud member of The Logan Golf and Country Club, even serving as president. For those of you who knew Ramon you know how much he loved sports, especially his Broncos, the Jazz, and the Utah college teams. Ramon was admittedly a fanatic about his lawn & garden, always preparing for Better Homes & Garden. Ramon was an animal whisperer, as all animals wild & domestic were driven to his animal bonding spirit. Ramon was a very private man and listening to stories about his life was an honor. Ramon was a good listener, a loyal friend, great father in law and an amazing dad. Ramon is survived by his wife Ann of 65 years, his son Randy (Pam), Julie (John Duran) & Jeff (Selene) His only brother Lowell Barber, his grandchildren, Scott Barber (Kandyce), Brandon Scott (Tresa) Amber Smith, Candice Barber, Kathryn Barber (Dusty), Tashia, Hachmeister (Jason), Nicholus Chugg (Craig) Joshua Chugg, Kory Scott (Elise) and Amanda Barber. He has 21 great grandchildren, 1 great great grandchild and 3 nieces, cousins, dear friends and neighbors. A viewing service will be held on Saturday March 16th from 11-12 at Nelson funeral home in Smithfield, a graveside service will immediately follow at the Smithfield Cemetery. in lieu of flowers, the family requests contributions in his name to Volunteer services at either Charles George VA Medical Center 1100 Tunnel Road in Asheville, NC 28805 or George E Wahlen VA Medical at 500 foothill drive, Salt Lake City , UT 84148

The family of Ramon David Barber created this Life Tributes page to make it easy to share your memories.

Send flowers to the Barber family.