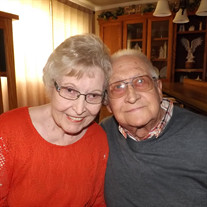 RaNae Edith Hansen Blanchard passed away November 25, 2016 in Bountiful, Utah, surrounded by her four children. RaNae passed away exactly eight months to the day after her sweetheart Tom passed. The entire family is so grateful for the faithful service provided for the past two years by her oldest daughter, DaLynn Case. RaNae was born on December 14, 1931, in Trenton, Utah, in the home of her grandfather. Her parents were Bill and Margaret Hansen. She was raised on the family farm in Amalga. After graduating from North Cache High, she married her childhood sweetheart, Thomas L. Blanchard Jr., in the Logan Temple. Toms’ career as a computer engineer in the aerospace industry took RaNae and children to several different cities across the U.S. The hallmark of RaNae’s life was service—service to family, church and to her community. She was the glue that held the family together and the number one cheerleader for each of her children. She held many positions of responsibility in her church including Stake Primary President, Stake Relief Society President and numerous other callings. She was loved by all. She never had a negative word to say about anyone and never complained about anything even when suffering from cancer, which finally took her life. RaNae is survived by her daughter Dalynn Case, son David and wife Ramona, son Dale, daughter Darla Morin, nineteen grandchildren and sixty great grandchildren, and sister Wilma Hampton. She was preceded in death by her father and mother, Bill and Margaret Hansen, sister Marilyn Hansen, brother Darrell, husband Thomas Lidell Blanchard, Jr., and son-in-law Ted Case. Viewing will be held the morning of November 30th from 10:00-11:45, Funeral service will follow at noon in the LDS Smithfield 11th ward chapel located at 79 East 200 South, Smithfield, UT. She will be interned in the Smithfield Cemetery following the service.

RaNae Edith Hansen Blanchard passed away November 25, 2016 in Bountiful, Utah, surrounded by her four children. RaNae passed away exactly eight months to the day after her sweetheart Tom passed. The entire family is so grateful for the faithful... View Obituary & Service Information

The family of RaNae Edith Hansen Blanchard created this Life Tributes page to make it easy to share your memories.

Send flowers to the Blanchard family.