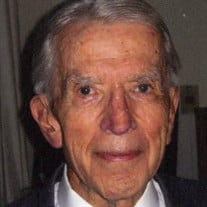 Ray Ellis Jorgensen, 91, passed away August 31, 2015 at the Legacy House of Logan. He was born November 21, 1923 in Burley, ID, to Royal Elred Jorgensen and Bernice Ellis Jorgensen. Ray was raised in Amalga, Utah. He attended school in Amalga, Smithfield and graduated from North Cache High School. Ray proudly served his country in the U.S. Army from 1944 to 1945. He served an LDS mission from 1947-1950 in the Spanish American Mission which covered five states. Ray received his Bachelor’s Degree from Utah State University. He married RaNae Nilson on January 27, 1950 in the Logan LDS Temple. Together they raised 5 daughters: Lynne, Ann, Bonnie, Carol and Trudy. He grew up working on the family farm in Amalga. As a newlywed he worked for California Packing Corporation (Del Monte) both in Smithfield and Ogden. After receiving his teaching degree, Ray taught elementary school for 28 years in the Logan School District. He served as a member of the Cache County School District Board of Education. He was instrumental in starting the Logan Cache Rich Credit Union where he was the President/Manager for 35 years. Ray was an active member of the Church of Jesus Christ of Latter-day Saints. He valued his service in numerous church callings. He especially enjoyed working in a student ward at Utah State University. His favorite pastimes included: taking jeep rides with his wife; collecting license plates; tinkering around his house and yard; spending time with his family; Bingo and especially feeding the ducks. Ray loved serving others. He was a tender caregiver to RaNae the last 10 years of her life. After her passing he found much joy helping and assisting other residents in the assisted living locations where he resided. Ray is survived by his 5 daughters: Lynne (Tom) Singleton, Providence, UT; Ann (Glen) Godfrey, Clarkston, UT; Bonnie (John) Bair, Puyallup, WA; Carol (Chad) Tillman, Madison, AL; and Trudy (Christian) Wilson, Smithfield, UT. He is also survived by 14 grandchildren and 35 great-grandchildren (with one on the way), his brother Keith E Jorgensen, sisters Ruth J Gittins and Noreen J Cronquist. He was preceded in death by his wife RaNae, grandson Michael Ray Godfrey, brothers Clarence Jorgensen and Dell Jorgensen, and sister, Beth J Allen. Funeral services will be held on Friday, September 4th, at the LDS Chapel located at 175 South and 100 West in Smithfield, beginning at 11:00 a.m. Friends may call from 6:00 – 8:00 p.m. Thursday at the Nelson Funeral Home, 85 South Main, Smithfield, and the church from 9:30 – 10:30 a.m. on Friday. Burial will be in the Smithfield Cemetery. Condolences may be expressed to the family online at www.nelsonfuneral home.com. The family wishes to express thanks to the loving staff at Legacy House.

Ray Ellis Jorgensen, 91, passed away August 31, 2015 at the Legacy House of Logan. He was born November 21, 1923 in Burley, ID, to Royal Elred Jorgensen and Bernice Ellis Jorgensen. Ray was raised in Amalga, Utah. He attended school in Amalga,... View Obituary & Service Information

The family of Ray Ellis Jorgensen created this Life Tributes page to make it easy to share your memories.

Send flowers to the Jorgensen family.