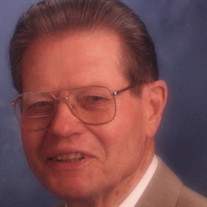 (Ray) Dale Webber, age 96, died October 26, 2020 at his home in Logan, Utah. Dale was born May 5, 1924 in Logan, Utah, to Albert Webber and Marie Havertz Webber. Dale had one sister, Esther Marie (Robert Rust), and three brothers, Albert June (Winifred Hardy), Edger Dean (Anne Jaggi), and Milton Al Mar (Laura Peterson). Dale grew up in Logan and graduated from Logan High School. During his senior year, he took night classes in aircraft mechanics at Utah State University. When he joined the United States Army Air Corp, he was well trained to lead a team of mechanics whose responsibility was to keep the airplanes in top condition. Dale was very diligent, and checked each plane after it had been made ready for another mission. Dale served in the Pacific where he was on the islands of Laite in the Philippines, Beiat, and other islands on the way to Japan. When they flew into Japan, there were Japanese planes on the runway. Dale hoped they knew the war was over! Dale studied soil conservation at Utah State University and graduated in 1950. His employment took him to several locations in Utah. Eventually, he was asked to work in the United States Secretary of Agriculture’s office and oversee the foreign program. Dale spent time in many countries, especially in Asia. After his retirement, he returned to Logan. He would always correct you if you talked about dirt. It was soil. Dale married Bobbie Lou Painter on November 19, 1949. Bobbie died of cancer. He married Shirley Baugh on March 22, 1980. She died of cancer, also. He eloped with Mattie Ann Robison to Europe where they spent their honeymoon after being married by the ship’s Captain. She died of causes incident to age. Dale was active in the Lions Club, Junior Chamber of Commerce, the Church of Jesus Christ of Latter Day Saints, and the Boy Scouts. He contributed often to USU and was a member of the Old Main Society. Dale loved to play golf until later in life when he injured his back. He was proud of his hole-in-one at the Bloomington Country Club and the Logan Country Club. Dale’s family and friends are invited to visit Nelson Funeral Home (162 E 400 N) on Saturday, October 31st, at noon for a viewing and to share memories of Dale’s exemplary life. Burial will be in the Providence Cemetery. Condolences & memories may be shared with the family at www.nelsonfuneralhome.com

The family of (Ray) Dale Webber created this Life Tributes page to make it easy to share your memories.

Send flowers to the Webber family.