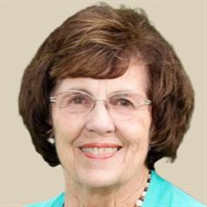 Rebecca Chambers Funk (91), of Smithfield, passed away on February 16, 2020, surrounded by her family. Rebecca was born on December 4, 1928 to Seth Jay and Leone Cantwell Chambers. She inherited her mother’s positive approach towards life and her father’s practical good sense. She grew up in Smithfield as the oldest of three children. She is survived by her two brothers, Robert (Helen) Chambers of Smithfield and Brian (Jacqueline) Chambers of North Logan, as well as a sister-in-law, Loila Funk Anderson of Logan. On August 20, 1951, Rebecca married her high school sweetheart, Charles Dennis Funk of Benson, in the Logan Utah Temple. They are the parents of nine children: Randy (Andrea) of Salt Lake City; Marianne Buttars (Darrell) of Clinton; Kevin (Maree) of Kaysville; Craig (Stacy) of Springboro, Ohio; Kent (Susan) of Santa Barbara, California; Robert (Nancy) of Smithfield; Becky Baird (Tony) of Smithfield; Kristine Smith (Mark) of Layton; and Lisa Fullmer (Troy) of Layton. Rebecca and Dennis have 47 grandchildren and 53 great-grandchildren. Rebecca attended elementary and junior high school in Smithfield and graduated from North Cache High School in 1947. She continued her education at Utah State University, graduating with a bachelor’s degree in Early Childhood Education. Rebecca taught first grade until the birth of her first child, when she became a full-time homemaker. Rebecca, Dennis and their children lived in Salt Lake City, Manti, and Madison, Wisconsin, before returning to Cache Valley in 1968. Rebecca’s life was marked by service to her family and to others. She supported her husband in his education, career, and in his church and civic service. She worked tirelessly in raising her nine children, teaching and supporting them. She read to her children, and encouraged them to excel and to pursue their dreams. Her influence is extensive and enduring, and now radiates out to three generations. Her impact on the world through her life’s work, charity, and empathy, cannot be measured. Rebecca served diligently in The Church of Jesus Christ of Latter-day Saints and in her children’s schools in various capacities. She served a full-time mission with Dennis to the England Leeds Mission in 1993-95, and served in the Logan Temple for many years. In their later years, she provided care for Dennis as he struggled with multiple health issues prior to his death in 2013. Her care for her beloved companion was heroic. As her life came to a close, she never lost the twinkle in her eye, her desire to compliment those around her, or bring joy to their lives. She looked for ways to build up others and to lift and help them in any way that she could. Her faith in Jesus Christ never wavered. She set an example of kindness and goodness for her family and those who knew her. As a family, we thank the staff at the Memory Care Unit of Maple Springs for the care they provided to Rebecca prior to her passing, and also express appreciation for the many acts of kindness she received from others. Funeral services will begin at 12:00 noon on Friday, February 21, at The Church of Jesus Christ of Latter-day Saints chapel located at 451 South 250 East, Smithfield. Friends may call from 6:00 to 8:00 p.m. Thursday, February 20 at the Nelson Funeral Home, 162 East 400 North in Logan, and from 10:30 to 11:30 a.m. Friday at the chapel in Smithfield. Condolences may be shared with the family at www.nelsonfuneralhome.com

Rebecca Chambers Funk (91), of Smithfield, passed away on February 16, 2020, surrounded by her family. Rebecca was born on December 4, 1928 to Seth Jay and Leone Cantwell Chambers. She inherited her mother&#8217;s positive approach towards... View Obituary & Service Information

The family of Rebecca Chambers Funk created this Life Tributes page to make it easy to share your memories.

Rebecca Chambers Funk (91), of Smithfield, passed away on February...

Send flowers to the Funk family.