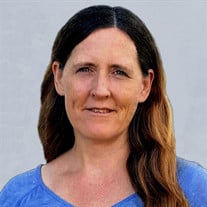 Rebecca Ann Miller Lehman, of Port Saint Lucie, Florida, passed away at 4:10 PM on Wednesday, April 26, 2017, in the ICU at the Moffitt Cancer Center in Tampa, Florida due to complications from Acute Myeloid Leukemia. Rebecca, or “Becky”, as she was commonly known by her family and friends, was 56 years old when her mortal journey ended. Becky was born in Logan, Utah, on July 16, 1960, and was raised in Richmond, Utah. She graduated from Sky View High School in 1978. At the age of 23, Becky married Kerry Lehman on October 20, 1984 in Logan, Utah. They were later sealed in the Logan LDS Temple on May 9, 1987. They made their home in Logan for 9 years, where Justin, Brittany, and Amy were born. In September of 1993 they moved to West Palm Beach, Florida so Kerry could pursue a career in Video production. In February of 1995 they moved to Port St. Lucie, Florida where Emily, Jacob, and Jennifer were born. All who were acquainted with Becky knew her to be a humble and beautiful soul. Becky’s love for God was the crowning feature of her life and the depth of feeling she had for Gospel Truth permeated her living at home and abroad. Becky served an 18 month mission for The Church of Jesus Christ of Latter-Day Saints in the Belgium Antwerp Mission, Dutch speaking. After her love for God came her love for her family, to whom her heartstrings were knitted with everlasting ties. In addition to these greatest loves, a powerful love for music shaped Becky’s life. She spent many years sharing her talents as a pianist and singer, while leading other people to further develop the music within themselves as well. Becky’s influence for good in many spheres was felt, is being felt, and will yet be felt in the lives of many who had the sweet pleasure of her association in this life. Becky is survived by her husband Kerry of 32 years, their children Justin, Brittany, Amy (Bret) Terry, Emily, Jacob and Jennifer. She is also survived by her siblings August Miller, Eric Miller, Lotti Merrill, Sandy Jones, Angela Hunter, Corey Miller, Daniel Miller, Rachel Jamison, and Jeni Graves. Becky was preceded in death by both of her parents, Harold Edward Miller and Bonnie Ann Ames, as well as a younger brother, Patrick, who died in infancy. A viewing will be held on Tuesday May 9, 2017 from 10:00 AM - 11:30 AM, followed by a funeral at 12:00 PM, at Nelson Funeral Home, located at 162 East 400 North, Logan, UT 84321. Burial will be in the Logan Cemetery. All who know Becky or her family are welcome to attend these scheduled events.

Rebecca Ann Miller Lehman, of Port Saint Lucie, Florida, passed away at 4:10 PM on Wednesday, April 26, 2017, in the ICU at the Moffitt Cancer Center in Tampa, Florida due to complications from Acute Myeloid Leukemia. Rebecca, or &#8220;Becky&#8221;,... View Obituary & Service Information

The family of Rebecca Ann Miller Lehman created this Life Tributes page to make it easy to share your memories.

Send flowers to the Lehman family.