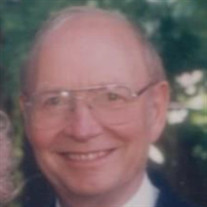 Reed Lamar Clayson passed away peacefully on 29 July 2021 in Scituate, Massachusetts. He was born on 8 September 1929 to Edward Clayson and Lula Romney Clayson in Cornish, Utah. He was the fourth of their five children. He was predeceased by Keith Edward Clayson (Guelda); Melba Clayson Checketts (Marlo); Rex Vidmar Clayson (Dorothy); Marvin Romney Clayson; and survived by his younger sister Maxine Nyland (Fred). He graduated from North Cache High School and then served a mission for the Church of Jesus Christ of Latter-Day Saints in Mexico. Upon his return he married Maxine Anne Harwood in the Salt Lake City Temple. He graduated from Utah State University, then served two years for the U.S. Army at Fort Bliss in El Paso, Texas. He then moved to Southern California where he commenced his career as a technical writer and systems analyst. He also later obtained a master's degree from Utah State University in 1964. Reed and Maxine, who passed away on 1 April 2016, raised four children who survive him: Mark Harwood Clayson of Gardena, California; Valerie Anne Winzenried (Jay) of Cody, Wyoming; David Reed Clayson (Suzanne) of Las Vegas, Nevada; and Carol Anne Clayson (James) of Scituate, Massachusetts. Reed and Maxine are also survived by twelve grandchildren and thirteen great grandchildren. Reed and Maxine lived and raised their children in Manhattan Beach, California; Anaheim, California; Falls Church, Virginia; Colorado Springs, Colorado and then finally Arvada, Colorado. Reed was always active in the Church, serving in many callings including numerous clerk positions, stake missionary, high priest group leader and a Bishopric. He also served in leadership positions in a Spanish Branch and a Hmong Branch in Colorado. Reed frequently used his creative abilities to write memorable road shows. Reed used his creative and technical abilities to have an interesting and productive career in the aerospace industry, defense contracting, environmental systems, energy development and governmental contract fields. Reed was an accomplished writer, and appreciated good literature, which he passed on to his children. He will be best remembered by those whose lives he touched as an extremely kind, patient and loving person who never lost his temper but would deeply care about others. He loved to share his vast knowledge on many subjects and to spend time with his wife and family. A funeral service on his behalf will be held at Nelson Funeral Home at 162 East 400 North, Logan, Utah on 14 August 2021 at 1:00 p.m. with a viewing held from 11:30-12:30. Services will be streamed via Zoom. Condolences & memories may be shared online at www.nelsonfuneralhome.com Nelson Funeral Home is inviting you to a scheduled Zoom meeting. Topic: Reed Clayson Funeral Time: Aug 14, 2021 01:00 PM Mountain Time (US and Canada) Join Zoom Meeting https://us02web.zoom.us/j/81864823617?pwd=eGVleGs3MTN5YlM0dFNwRHlGNVBwUT09 Meeting ID: 818 6482 3617 Passcode: Reed

Reed Lamar Clayson passed away peacefully on 29 July 2021 in Scituate, Massachusetts. He was born on 8 September 1929 to Edward Clayson and Lula Romney Clayson in Cornish, Utah. He was the fourth of their five children. He was predeceased by... View Obituary & Service Information

The family of Reed LaMar Clayson created this Life Tributes page to make it easy to share your memories.

Send flowers to the Clayson family.