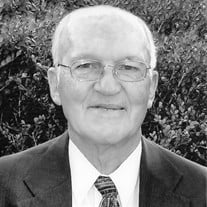 Reed Heninger Gunnell, 88, passed away peacefully on May 20, 2015. Reed was born January 7, 1927 in Logan, Utah, the son of Joshua Brown and Hazel Heninger Gunnell. He married his high school sweetheart, Lorine Jaggi, in the Logan LDS Temple on June 6, 1947. They are the parents of six children: Bruce (Casey), Roy (deceased), Carey (Kris), Lorie (Charlie) Brown, Lois (Bob) Summers and Randi Carter. Lorine passed away in 1993. They have many grandchildren and great-grandchildren. In 1994, Reed married Eunice Curdy. Eunice passed away in 2010. Eunice’s children are: Mark (Eileen), Ronda Hansen, Gail, Shauna (Dan) Colvin, Aaron (RaNae), Joseph (Irene), Manny (Deon), Rafael and many grandchildren and great-grandchildren. He is preceded in death by his parents, wives, son Roy, two grandsons: Shane Gunnell and Tysen Brown, his sister Maxine Wallace and brother Burke. Reed was especially proud of his posterity, their accomplishments and devotion to their families and church. In his youth, Reed enjoyed playing marbles and won the 1941 Logan City championship. He served in the Army during World War II in Germany. He worked for Job Service for 30 years. He was a lifelong member of the Church of Jesus Christ of Latter-day Saints. His church service included two times as a bishop, working for over 50 years in the Logan Temple, temple sealer and stake patriarch. Reed and Eunice served an 18 month mission to Hawaii in 1995. He donated 20 gallons of blood during his life. He was an avid swimmer, accumulating 2,550 miles swimming laps. Reed had genuine love and concern for others; never had an unkind word to say about anyone and those around him could feel of his goodness. He always gave his very best and touched many people’s lives. We love you Dad. “Thanks for everything!” The family expresses appreciation for the care he received the past two years at Terrace Grove and for the many years of care from Dr. Michael Stones. Funeral services will be held at 11:00 a.m. on Wednesday, May 27, 2015 at the Logan LDS 10th Ward building, 800 North 500 East, Logan, Utah. A viewing will be held on Tuesday, May 26, from 6 to 8 p.m. at Nelson Funeral Home, 162 East 400 North, Logan, and from 9:30-10:30 a.m. Wednesday, at the church prior to the funeral. Interment will be in the Logan City Cemetery.

The family of Reed Heninger Gunnell created this Life Tributes page to make it easy to share your memories.

Send flowers to the Gunnell family.