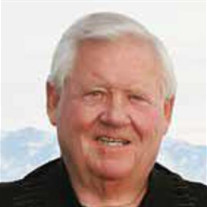 Rex Jay Rasmussen passed away on May 4, 2019 with his two children by his side. Rex was born on July 30, 1938 in Logan, Utah to Max and Bernice (nee Larsen) Rasmussen. He grew-up in Cache Junction on the family farm and graduated from North Cache High School in 1956. After high school, Rex joined the U.S. Navy where he showed an aptitude for electronics. In 1959, IBM hired Rex as a field engineer. During that time, he maintained computers at ATK Thiokol in Promontory, UT. There, he met his wife, Colleen who he always affectionately called “Collie”. They were married on February 9, 1962 and shared nearly 54 years together. Rex worked for IBM for 14 years as a manager. In 1968, Rex was selected for an IBM residence program where he completed his BBA and MBA from Pace University. In 1973, ITEL Corporation hired Rex as Vice President in the Data Products Group and he was promoted to President of Data Systems Division. In 1979, Rex founded a computer company, Retail Solutions, Inc. He continued to operate his own computer business until he retired. In 1994, Rex and Colleen returned to Cache Valley to slow down the pace of life. Rex was proud, independent and ambitious. He was very generous, gregarious and loved his family and friends. He had a mischievous streak. He’d play pranks on family and friends. His kids knew he was telling a tall tale by his distinct smirk. He enjoyed traveling the world and spontaneous adventures. In his heyday, he would fly to Las Vegas and take over a blackjack table with friends. He’d then call “Collie” to hop on a plane to join him on a moment’s notice to celebrate his winnings. By all accounts, he lived life with gusto. Rex is survived by his son, Todd of Logan, UT who was his caregiver even when Rex stubbornly insisted he didn’t need any help. He is also survived by daughter, Janna (Joe) Hawkins of Petersboro, UT and his siblings, Wendell Rasmussen, Maxine Hansen, Rhonda Fleming and Clair Rasmussen and in-laws, nieces and nephews. Rex has really missed his beautiful “Collie” since she passed away on Christmas night 2015. The family will hold a celebration of his life at a future date. Rex often supported causes related to military veterans and first responders. In lieu of flowers, the family requests that donations be made to the Gary Sinise Foundation.

Rex Jay Rasmussen passed away on May 4, 2019 with his two children by his side. Rex was born on July 30, 1938 in Logan, Utah to Max and Bernice (nee Larsen) Rasmussen. He grew-up in Cache Junction on the family farm and graduated from North... View Obituary & Service Information

The family of Rex Jay Rasmussen created this Life Tributes page to make it easy to share your memories.

Send flowers to the Rasmussen family.