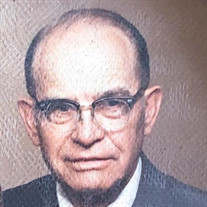 Rex K. Thompson passed away on January 8, 2021 in South Jordan Utah, a week after his 101st birthday. He was born in Clarkston Utah on December 30, 1919 to Kenneth G. and Peru Jardine Thompson. He was the oldest of six children and grew up surrounded by a large extended family that he treasured throughout his life. He attended primary school in Clarkston and graduated from North Cache High School. After attending Utah State University for a year, he served as a missionary in the North Central States Mission. Upon his return, he married his lifelong sweetheart Edna Griffin, on October 12, 1943 in the Logan Temple. World War II was on going, so shortly after his marriage, Rex was inducted into the Fifth Division of the US Marine Corp. He trained in San Diego and Hawaii and went on to participate in the battle of Iwo Jima and the occupation of Japan. He loved the Band of Brothers he served with in the Corps and maintained connections and associations with them throughout his life. He turned the gratitude he felt at returning to his wife and child after the war into a life of service to his family, his church and his country. He and Edna raised their family in Logan where Rex worked as a letter carrier for the US Postal Service. He served in many callings in his LDS ward and stake. He was bishop of the Logan 9th Ward and the president of Logan Cache Stake. After his retirement, he and Edna served together on a mission to New Zealand. He was a beloved son, brother, husband, father, grandfather, uncle and friend. His grandchildren called him Pops and they delighted in spending time with him, hearing his stories and observing his example. He had a love of learning, and supported his family in all of their educational endeavors. His humor and cheerful non-judgmental outlook endeared him to all who associated with him. He had great and unbending faith and was a true disciple of Jesus Christ. He is survived by his five children, Kaye T. Hansen Salt Lake City, Ruth T. Palmer (Larry) West Valley City, Beth T. Roberts South Jordan, Scott G. Thompson Bountiful and Karen T. Carlson (Morgan) Logan. Twenty-five grandchildren and seventy-three great grandchildren. Also surviving are his sisters Electa Nelson and Sylvia Hansen and his brother Melvin (Lila) Thompson. He was preceded in death by his wife Edna, his parents, a brother Joe Thompson, a sister Faye Godfrey and son-in-law Brent W. Roberts. The family wishes to express gratitude and thanks to Ruth & Larry Palmer for the love and care they gave to Rex over the past five years as he lived with them following Edna's death. Services will be held at the 9th Ward Meetinghouse 125 East 500 North on January 15th. A family viewing will be held prior to the funeral at 11:00 with the family funeral following at noon. Services can be viewed virtually at: Join Zoom Meeting A video of the funeral service has been uploaded to the tribute wall. We sincerely apologize for the poor audio quality of the zoom service. We have also uploaded a clear audio recording of the service.

Rex K. Thompson passed away on January 8, 2021 in South Jordan Utah, a week after his 101st birthday. He was born in Clarkston Utah on December 30, 1919 to Kenneth G. and Peru Jardine Thompson. He was the oldest of six children and grew up... View Obituary & Service Information

The family of Rex Kay Thompson created this Life Tributes page to make it easy to share your memories.

Send flowers to the Thompson family.