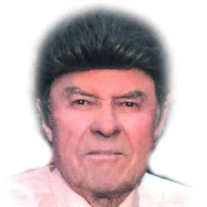 Richard Keller Everton was born April 15, 1931 to Hazel Keller and Edgar Everton. Richard died Friday October 16, 2020 in his North Logan home of 60 years, of natural causes. Richard’s father died when he was three months old. His mother worked to support the family at Everton’s Hardware, the family business . He was raised by his mother, Uncle Mitt Keller and his Grandma Keller. He lived all his life in Cache Valley. After graduating from Logan High, he joined the Navy and served four years during the Korean War on the USS Albuquerque rising to the rank of Petty Officer Third Class. He returned and served a mission for The Church of Jesus Christ of Latter Day Saints in the Western Central States Mission. Two years later, while attending Utah State University, he met his sweetheart Sandra Rae Swenson and they were married June 25, 1958 in the Logan Temple. Amid working and building the Everton’s Hardware business, they raised their family of four girls. Later in his life Richard served as an ordinance worker in the Logan Utah Temple. He is survived by his daughters and their families. Terry and Wendi Naylor (Providence), Dan and Angela Farnsworth (Nibley), Wes and Dayna Johnson (Logan), and Paul and Kimberly Hansen(Bountiful), eighteen grandchildren, and twenty-four great grandchildren. He was preceded in death by his parents, sister Mildred Everton, brother Robert Everton, sister Dorothy Riley and his beloved wife Sandra. Funeral services will be held Wednesday, October 21, at 11:00 am with a viewing from 9:30 to 10:30 am at 1105 East 2100 North, North Logan, Utah. In lieu of flowers, Richard was a big believer in missionary work, please donate to the Church of Jesus Christ of Latter-day Saints missionary fund. Nelson Funeral Home is inviting you to a scheduled Zoom meeting. Topic: Richard Everton Funeral Time: Oct 21, 2020 11:00 AM Mountain Time (US and Canada) Join Zoom Meeting https://us02web.zoom.us/j/84541831626 Meeting ID: 845 4183 1626

The family of Richard Keller Everton created this Life Tributes page to make it easy to share your memories.

Send flowers to the Everton family.