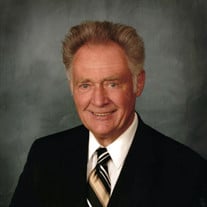 Richard Ernest Hymas returned home to the loving arms of our Heavenly Father and to a very excited mother, father, and granddaughter, on March 23, 2019. He was born February 9, 1932, to Ernest and Delca Hymas. He graduated from Logan High School in 1950. Shortly after graduation, he joined the U.S. Army where he served from 1951 to 1954. After returning home he ran the family business, The Cactus Club, for 35 years. He met and fell in love with his eternal companion, Margie Clegg, and they were married February 16, 1956; they were later sealed in the Logan Temple. They were able to share 63 years together. Dick and Marge were blessed with six children, four daughters and two sons, who they love and appreciate: Rick (Sylvia) Hymas, Deb Maes, Shauna (Mark) Brindley, Brenda Troy (Bill) Wabel, Todd (Kelley) Hymas, and Tammy (Scott) James. Dad was very proud of his title "Papa Dick" to 22 grandchildren, and 39 great grandchildren with one on the way. He was always happiest when he was surrounded by family and enjoying good food and especially a hot dog roast. Dad loved remodeling, teasing, and joking with anyone nearby. He spent many years dressing up as Santa to bring joy to his family and those less fortunate. Dad believed no one should have idle hands. A strong work ethic was instilled in his children. His son nicknamed him "Daylight to Dark Dick." He was a member of The Church of Jesus Christ of Latter-Day Saints where he enjoyed serving in the branch presidency of Terrace Grove. He also served as a home teacher for many years. He is survived by his wife, Marge, who loved his heart and soul and provided care and comfort for him, his six children, sister Marlené, and three brothers: Keith (Beth) Hymas, Gary (Hope) Hymas, and Ron (Marsha) Hymas. He was preceded in death by his parents, granddaughter, Tianna, and brother-in-law, Elden (Stu) Jensen. Funeral services will be held Friday, March 29, 2019, at 12:00 p.m. at the Willow Valley Ward meetinghouse, 825 North 200 West, Logan, Utah. A viewing will be held Thursday, March 28, 2019, from 6:00 p.m. to 8:00 p.m. at Nelson Funeral Home, 162 East 400 North, Logan, Utah, and a viewing prior to the funeral on Friday, March 29, 2019, from 10:30 a.m. to 11:30 a.m. Interment will be at the Logan Cemetery.

Richard Ernest Hymas returned home to the loving arms of our Heavenly Father and to a very excited mother, father, and granddaughter, on March 23, 2019. He was born February 9, 1932, to Ernest and Delca Hymas. He graduated from Logan High School... View Obituary & Service Information

The family of Richard Ernest Hymas created this Life Tributes page to make it easy to share your memories.

Richard Ernest Hymas returned home to the loving arms of our...

Send flowers to the Hymas family.