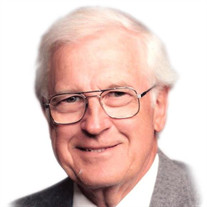 Richard (Dick) Francis Jaacks died of natural causes on September 24, 2015 at Legacy House of Logan. He was born in Chicago, Illinois on October 21, 1925 to Lucille Chlebik Jaglowski and Louis S. Jaglowski. He attended Quigley Seminary and Foreman High School in Chicago. He was drafted into the U.S. Navy during World War II and served in the Pacific on the USS Haven, a Navy Hospital Ship. Thirty days after the atom bomb was dropped on Nagasaki, Japan, The Haven docked in Nagasaki and acted as a base hospital for the allied prisoners of war who were held on the Island of Kyushu. Ten thousand prisoners funneled through the haven to determine their physical ability. Dick spent 30 days caring for the allied soldiers who had been imprisoned on the Island of Kyushu. After Dick was honorably discharged from the Navy, he attended night school at DePaul University while working for an accounting firm in Chicago. In 1948, Dick married Bernice Drexler. They had three daughters: Donna, Catherine and Sandra. They were later divorced. He began working for L.D. Schreiber and Company in Chicago. In 1953, he was transferred to Green Bay, Wisconsin, where he worked in the corporate office and then transferred to Logan in 1975. He retired in 1990 after 42 years of service. In 1976, Dick married Marilyn Hatch Anderson. They were married for 23 years until the time of Marilyn’s death in 2009. Dick loved to cook for his extended family (such fabulous pound cake!), play bridge, go fishing with friends, travel all over the world with Marilyn, and spend time with his children, grandchildren, and 12 great grandchildren. Dick is survived by his three daughters: Donna Geurts (Ron), of Townsend, WI, Catherine Carlson (Don), of Flagstaff, AZ, Sandra Asher (John), of Sturgeon Bay, WI, and brother, Louis Jaacks, of Lake Zurich, IL. He is also survived by six stepchildren: Brad Anderson (Debbi), Orem, UT; Vicki Anderson, Logan, UT; Kirk Anderson (Hillary), Ketchum, ID, Jeff Anderson, Ketchum, ID; Tony Anderson, Sun Valley, ID; and Bill Anderson, Salt Lake City, UT. Also surviving are two nieces, Audrey and Lucille Gallagher, and nephew, Louis Gallagher, of Arlington Heights, IL. Grandchildren include: Jessica Geurts, David and Mariah Asher, Devon and Melissa Carlson. StepGrandchildren are: Sarah Thimmes, Hollie Bulkley, Brian Anderson, Steven Anderson, Joshua Anderson, Brittany Lewis, Casey Anderson, James Anderson, Lukas Anderson, McKenna Anderson, and Temuulen Anderson. Dick was preceded in death by his parents and sister, Lucille Gallagher. A viewing will be held on Tuesday, September 29, 2015, at St. Thomas Aquinas Catholic Church, in Hyde Park, Utah, from 11:00 am to 11:45 am. A funeral mass will follow at 12:00 pm. Nelson Funeral Home is handling the arrangements and condolences can be expressed at www.nelsonfuneralhome.com The family would like to give a special thank you to the kind people at Legacy House, Dr. Francis and Bonnie Hart at Access Hospice Care.

The family of Richard Francis Jaacks created this Life Tributes page to make it easy to share your memories.

Send flowers to the Jaacks family.