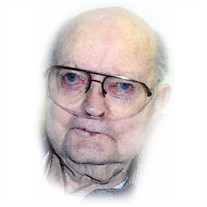 Providence- Richard Wheeler Robinson, age 93, passed away of natural causes Thursday, November 25th at Cache Valley Assisted Living in Providence, Utah. Richard was born June 4, 1917 in Tetonia Basin near Felt, Idaho. He was the 12th of 14 children born to Elijah Robinson and Lucinda Almeda Wheeler. Richard married Geraldine McBride in 1947 and they have two sons, Joe and Jim. He lived in Idaho, Montana, and Utah throughout his life, working as a famer and postal employee. He eventually settled in Providence, where he married LaVoy Williams. Richard loved to fish, bowl, play tennis, pool, bingo, and cards. He was very good at all of these. A very special thanks to CNS Hospice. To Carol, James, Stacey & Brian. Also to the wonderful staff at Cache Valley Assisted Living. Richard was a member of the Church of Jesus Christ of Latter-Day Saints. Richard was preceded in death by his parents, six brothers, seven sisters, and son Joe. He is survived by his wife LaVoy, son Jim and wife Judy, daughter-in-law Janet, two grandchildren, Brand and Donna, five great-grandchildren, and one great-great-grandchild. Services will be held December 2nd at noon at Nelson Funeral Home, 162 East 400 North, Logan, Utah.

The family of Richard Wheeler Robinson created this Life Tributes page to make it easy to share your memories.

Send flowers to the Robinson family.