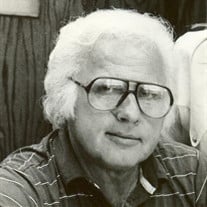 Robert Charles Mitchell, Age 82, died on November 1, 2016 of natural causes Our husband, father, grandfather, and great-grandfather was born Feb. 14, 1934, at Fairfield, Iowa, to Ervin Arthur and Bernice Mae (Hisel) Mitchell. He attended Fairfield schools, before joining the U.S. Navy in 1951, during the Korean War. Following his Navy service, he attended Brigham Young University, and later graduated from Weber State College, majoring in history and journalism. While a student at BYU, he met his eternal companion, Katherine LaRee Wade, and they were married May 29, 1957, in the historic John Taylor House in Nauvoo, Ill. They were later sealed in the Salt Lake Temple. His long-time newspaper career began with a short stint as a reporter and advertising salesman for the Van Buren County, Iowa, Register. He then joined the staff of the Deseret News in 1957 and worked there in many reporting and editing capacities for over 35 years, receiving many awards for his dedicated work and community service. Because of his love for the history and architecture of his adopted state, he wrote many historical features for the newspaper, which won him the Utah Heritage Foundation’s first Service Award, for service to Utah. He was appointed to the Foundation’s board of directors, and then elected Foundation president for two years. His influence may still be seen at many historic sites in the state, including Fairfield Stagecoach Inn, the Brigham Young winter home in St. George, and the Jacob Hamlin home in Southern Utah. Robert and family lived in the Bountiful/Centerville area for many years before moving to Logan in 2003, where he was a member of the Crockett Ward, and then the Wellsville 1st Ward. He was an active member of the LDS Church. He enjoyed collecting and refinishing antique furniture, and was an avid genealogist, compiling three extensive family histories. His survivors include his wife, two sons and four daughters: Rhett Ervin (Susan) Mitchell; Melanie (Brian) Taylor; Melinda Mitchell (wife Nancy Brummel); Bradley Wade (Emily Candy) Mitchell; Loralee (Jonathan) Choate; Loraina (Byron) Pells; 17 grandchildren, and 11 great-grandchildren. In addition, he is survived by a daughter, Julienne (Tom) Rumack, and her daughter Emily Aria Rumack-Cruden (Kellen) from a previous marriage, and one brother, Michael A. Mitchell, of Grand Island, Nebraska. He was preceded in death by his parents, a grandson, Matthew David Choate, and a brother, Ervin Eugene Mitchell. Funeral services will be held at 1pm on Saturday, November 5 at Nelson Funeral Home, 162 East 400 North, Logan, Utah and burial will be in Logan City Cemetery. Viewing will be held from 11:30am-12:30pm. Condolences & memories may be shared online at www.nelsonfuneralhome.com.

The family of Robert Charles Mitchell created this Life Tributes page to make it easy to share your memories.

Send flowers to the Mitchell family.