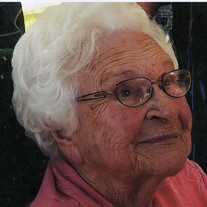 RoGene (Jean) Winona Bradford Frank, 101, died Sunday evening in her home in Elwood surrounded by her family. She was born on July 11, 1914, to Samuel Blaine and Minnie Cutler Bradford in Corinne, Utah, the third of eight children. She married Duane J. Frank on February 26, 1935, in Ogden. The marriage was later solemnized in the Logan Temple. Mom spent her early years as a loving daughter taking care of her sickly mother. She also took care of her younger brothers. At an early age she was baking cakes, making bread, which she had to put on a chair to knead, and helping with meals. When she married dad they bought a farm in Elwood where they worked and raised their family. She was a very talented homemaker and a great help to dad. She could hoe and top beets, milk cows and drive tractor if needed. She took great pride in her flowers and garden. She definitely had a green thumb, which you would see with all the beautiful flowers she had around the yard and in her house, especially African Violets. She was never idle. She made quilts, crocheted doilies, sewed booties for the humanitarian service, created kitchen towels, knitted kitchen wash clothes and made potato bags. She made beautiful afghans for her many grandchildren and baby quilts for grandchildren and great grandchildren. Mom loved the gospel. She served in many callings in Sunday school, primary, mutual and relief society. When she was compassionate service leader she organized the Sunshine Sisters taking meals into new mothers and giving them a receiving blanket for the baby. She was an avid genealogist. Her love for genealogy resulted in her organizing and publishing several family histories. Survivors include her son Brad (Deanna) Frank, Elwood; three daughters, DeAnn (Robert) Fehlman, Oakley, Idaho; Barbara (Ron) Thompson, Elwood; Toni (Norm) Johnson, Thatcher; daughter-in-law, Gloria Thompson, Elwood, two brothers, Darwin Bradford, Reno and Gerwyn Bradford, Centerville. Her posterity includes 25 grandchildren, 60 great grandchildren and 20 great great grandchildren. Mom was preceded in death by her husband, Duane; one son, Carlos; three grandchildren, three sisters and two brothers. So much appreciation is given to IHC Hospice, especially Mavis and Russell. With their assistance we were able to keep mom in her own home. Her neighbors and friends were a great support also. Funeral will be Friday, September 25, 2015, 11:00 at the Elwood Ward church, 4865 West 9600 North, Elwood. Viewings will be held Thursday, September 24, evening from 6:30 to 7:30 at the Elwood Ward and prior to the service from 10:00 to 10:45 am, Elwood Ward Interment will be in the Elwood Cemetery. Thank you Elwood 2nd Ward for your compassionate service. Condolences and memories may be shared with the family online at www.nelsonfuneralhome.com

RoGene (Jean) Winona Bradford Frank, 101, died Sunday evening in her home in Elwood surrounded by her family. She was born on July 11, 1914, to Samuel Blaine and Minnie Cutler Bradford in Corinne, Utah, the third of eight children. She married... View Obituary & Service Information

The family of RoGene Winona Frank created this Life Tributes page to make it easy to share your memories.

Send flowers to the Frank family.