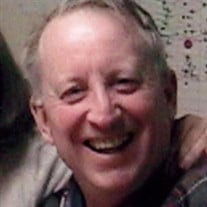 Roger Michael Lincoln, of Smithfield, Utah, was born in Yakima, Washington on May 13, 1947. He was a spry 73 years old at the time of his passing. He was working on a gardening project with Nancy, his wife of 48 years, when he suffered an accident resulting in an unrecoverable brain injury. Roger moved to the Territory of Alaska with his parents Robert and Elverda Lincoln in 1950, as early settlers and homesteaders of the Matanuska-Susitna Valley. He was an attendee of the historic Old Wasilla School House, and graduated from Wasilla High School in 1965, six years after Alaska became a state. Roger attended South Dakota State University and Brigham Young University, where he earned a Bachelors of Science in Geography with a minor in Cartography. Roger joined the Marine Corps and served as a radio technician in the Vietnam War. His military service spanned decades. He was in the Marine Corps, Navy, and Army, where he retired as the acting first sergeant of the last Arctic scout unit in the Alaska National Guard. Roger also retired from the Matanuska-Susitna Borough School District as an electronics technician, and was the first computer technician when computers were introduced to the school district. In 2002, Roger and Nancy moved to Northern Utah, settling in Smithfield, close to the Logan LDS Temple, the site of their marriage in 1972. He was one of the woodwrights at the American West Heritage Center and spent a couple decades sharing his love of woodworking with the community. He assisted with woodshop classes at Sky View High School, and was the president of the Cache Carvers Club for several years. Roger served an LDS mission to West Virginia with his wife Nancy from 2007-2008. Roger is survived by his wife Nancy, also of Smithfield, his mother Elverda Lincoln and his sisters Linda Lincoln (Mike Hendrix) and Barbara Servin, all of Wasilla, Alaska. He is also survived by his children Blaine Lincoln (Colleen) of Fontana, CA, Kristin Cable (Dwight) of Eagle Mountain, UT, Kathleen Provow (Jeremy) of Longmont, CO, Bethany Mott (Anthony) of Parker, CO, Jana Hill (Ron) of Nibley, UT, and 22 grandchildren, with his first great grandchild on the way. He is preceded in death by his father, Robert Lincoln, and his brother in law, Bruce Servin. Roger was quiet about his contributions to community but was a believer in helping others. In lieu of flowers, he would appreciate contributions to the LDS Philanthropies Humanitarian Fund at https://donate.churchofjesuschrist.org/donations/church/humanitarian-services/humanitarian-aid-fund.html. Funeral services will be held on Tuesday, June 23rd at 1 pm at the Smithfield 26th Ward Chapel (640 N 200 E) with a viewing from 11:30-12:30. Interment will follow at the Brigham City Cemetery. Condolences & memories may be shared online at www.nelsonfuneralhome.com

Roger Michael Lincoln, of Smithfield, Utah, was born in Yakima, Washington on May 13, 1947. He was a spry 73 years old at the time of his passing. He was working on a gardening project with Nancy, his wife of 48 years, when he suffered an... View Obituary & Service Information

The family of Roger Michael Lincoln created this Life Tributes page to make it easy to share your memories.

Roger Michael Lincoln, of Smithfield, Utah, was born in Yakima,...

Send flowers to the Lincoln family.