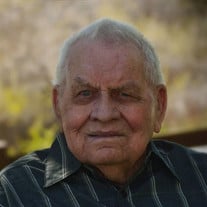 Roland S. Hansen born May 11, 1922 in Smithfield, Utah to John T. and Sena Holjeson Hansen. He died January 26, 2015 at his home in Smithfield surrounded by his family. He attended Summit Elementary School, Smithfield Junior High and North Cache High School. He enlisted in the US Marine Corp. Sept 16, 1942. He was in the invasion of Bouganville in the Solomon Islands, Guam in Marianas Islands, and Iwo Jima in the Volcanis Islands. He was wounded in action February 27, 1945 and received the Purple Heart. He married Hazel Hebdon June 10, 1947 in the Idaho Falls Temple. They were the parents of three daughters: RoAnn (Blaine) Ashworth (deceased), Dixie (Paul) Baird, and Sherilyn (Ron) Kohler. He worked for his brother Lyman for 35 years in the Conoco Service Station. Dad loved to garden and always had an abundance of lovely vegetables, which he shared with family, friends, neighbors and anyone who dropped in. Dad and Mom served for four-and-a-half years in a service mission as directors of the Home-Craft Dept. at the Deseret Industries in Logan, Utah. He is survived by his wife, two daughters, one brother, Lyman, one sister, Hilda Ferguson, one sister-in-law Gretta Hansen, twenty grandchildren, 35 great-grandchildren, and one great-great-grandchild. He was preceded in death by his parents, a daughter, a granddaughter, three brothers, and three sisters. The family would like to give a special recognition to CNS and Hospice services, and a special thanks to Carol McDonald and Todd Thomas. Thank you for the love and care you showed our family during this time. Funeral services will be held Saturday, January 31, 2015 at 12 o’clock in the Smithfield 14th Ward Church, 451 South 250 East. Viewing will be held Friday evening from 6-8 PM at the Nelson Funeral Home, 85 South Main, Smithfield, Utah and one hour prior to the funeral. Burial will take place in the Smithfield Cemetery with full military honors being presented by the Marine Corp. League. Condolences and memories may be shared with the family on line at www.nelsonfuneralhome.com

The family of Roland S. Hansen created this Life Tributes page to make it easy to share your memories.