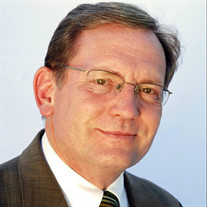 To watch the service live click on the following ZOOM link: https://us02web.zoom.us/j/85290636803?pwd=YlVhL0pMbWhpcWdsL3hCSFp0dFRFUT09 Ronald Thomas Daly, Jr., beloved husband of Diane Daly, passed away peacefully on Wednesday, July 15, 2020, in McMurray, Pennsylvania, at age 63 due to complications of multiple strokes suffered during the past year. Ron was born October 3, 1956, in Salt Lake City to the late Ronald and Donna Swasey Daly. His childhood homes included Utah, California, Washington, Nevada, and Nebraska. During his youth, he enjoyed scouting and earned awards for public speaking. Following high school, he served a mission for The Church of Jesus Christ of Latter-day Saints in Argentina, where he became fluent in Spanish. Ron used his bilingual skills in his career, church service, and daily life. Ron lived in northern California for 38 years and served as a San Jose police officer for 29 years. He used his talents for teaching and speaking as a field training officer, in the video unit of the training department, and as a P.O.S.T. Master Instructor providing advanced officer training to law enforcement throughout the country. Despite his accomplishments, it was the small moments, like sitting on a schoolroom floor showing his gear to kindergartners or teaching life lessons to youth on ride-alongs, that he treasured. Ron was a sought-after public speaker, not only at work but also for his church, where he served in various capacities including bishop and counselor in two stake presidencies. Many weekends were filled traveling around the state for speaking engagements. In retirement, he and Diane served as missionaries in Guatemala for The Church of Jesus Christ of Latter-day Saints, as temple ordinance workers, as Pathway missionaries, and as service missionaries at the Bishop’s Storehouse. Ron strived to be a disciple of Christ in all circumstances. In doing so, he touched countless lives. He was gifted at connecting with people and remembering names. While maintaining a vast circle of friends and acquaintances, he also reached out to the one. His joys included family, food (with hot sauce!), music, and service to individuals. Friends will remember his spiritual sensitivity, corny jokes, thumb wars, and clown drawings. Favorite sayings of his will also come to mind. To complainers, he would remark, “I had to walk to school uphill both ways with only a pair of shorts on.” He’d turn down an offer with, “No thanks, just had a bar of soap.” Ask what’s for dinner and he would likely answer, “Greasy grimy gopher guts.” Win a game and he’d wink, “Old age and treachery always outwit youth and skill.” He often cited the Victor Hugo quote, “Music expresses that which cannot be put into words.” Above all, Ron loved the Lord Jesus Christ and lived with faith. “He giveth power to the faint; and to them that have no might he increaseth strength… they that wait upon the Lord shall renew their strength; they shall mount up with wings as eagles….” (Isaiah 40:29-31). Ron is survived by his wife, Diane; children: April (Jeff) Morgan, Ashley (Brett) Hooks, Terik (Annalisse) Daly, and Kelsey (Benjamin) Bridge; stepdaughters: Gretel (Steve) Richins and Genevieve (Phillip) Peterson; siblings: Diana (Kevin) Glover, Kathy (Adrian) Morgan, Richard (Terri) Daly, and John (Jennifer) Daly; and 29 grandchildren. The funeral will be a private family service due to the COVID-19 pandemic. Interment will be in Smithfield, Utah. In lieu of flowers, donations may be made to Latter-Day Saint Charities. http://philanthropies.churchofjesuschrist.org/humanitarian-services The family expresses gratitude to the staff at Paramount Care Center and OSPTA Hospice for their attentive care during Ron’s final months.

The family of Ronald Thomas Daly Jr created this Life Tributes page to make it easy to share your memories.

To watch the service live click on the following ZOOM link:...

Send flowers to the Daly family.