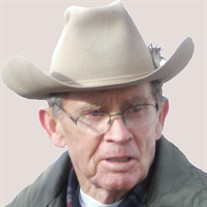 Ronald Deane Harrison was born in Malad, Idaho on July 5, 1929 to Lily Rosenberg and Jesse Dredge Harrison. He passed away on October 16, 2021 in his home in Hyrum, Utah. He was preceded in death by infant daughter, Tamera Harrison, wife Ruth Harrison, and siblings: Wayne Harrison (Patty), Connie Pugsley (Richard), Leon Harrison (Dode), Jax Marsh (Roy), Diane Thomas (Jess), Jesse D Harrison (LaRae). He is survied by sister and friend Joyse Shanks (Forrest). Deane's early days were spent on a ranch near Malad and after the family moved to town he'd spend the summer on his uncle's ranch. The love of the rancher's life of hard work, riding horses, grazing cattle and thrashing hay never left him. He tried to recreate this ranch life on his small farm in Hyrum which always had a dog, horses, a milk cow, chickens and various hobby animals. He said that his farm was not about owning animals but a place to raise his children: Ruth Petersen (Phil), Renate Brunsvik (Fred), Ron Harrison, Roger Harrison (Carole), Richard Harrison (Kim), Reid Harrison (Cyndi). He loaded his children in the back of a pick-up truck pulling a horse trailer full of his various animals and took them to state fairs, on back packing trips, and to rodeo competitions. Deane boxed at Brigham Young University, served a mission to Western Canada, then earned a BS degree from Utah State University and a MS degree from Colorado State University in Range Management . He married Dorothy Ruth Chambers in the Logan Temple on December 20, 1952. During the 66 years they were married, they lived in many places in Utah and around the world while he worked for the Soil Conservation Service. He became the State Resourse Conservationalist for Utah. He loved meeting with ranchers, who usually became good friends, to develop conservation and range management plans. Deane had a keen interest in all around him; always learning, he had many hobbies including traveling, gardening, hunting, and collecting things like bobbed wire, arrowheads, old farm equipment, and of course horses. He restored a carriage and one horse sled, then took friends and family on rides. He was proud of his heritage and one memorable trip took him to Latfia where he found the gravestones and the neighborhood of his mother's family who had fled from there after persecution because of their Jewish faith. He was a member of the Lions Club, the Saddle Club and served as the fund raising chairman for the Hyrum City Library. Deane was dedicated to The Church of Jesus Christ of Latter Day Saints and had a testimony of it's truthfulness. He served often in the scouting program, then on the High Council, in bishoprics, as a branch president in a student ward at USU, and as a stake patriarch. Deane and Ruth served two missions together: one in Zambia, and the other in the Philippines. They served 13 years in the Logan Temple. His unwavering testimony, stories, sense of humor, and love of life will live on in the memories of his friends and family. Funeral Services will be held at 11:00 A.M. Friday, October 22, at the Hyrum, Utah 6th Ward Chapel, 455 East 100 South. There will be a viewing one hour before the service. In lieu of flowers, please contribute to the Hyrum City Library or the Humanitarian Fund through The Church of Jesus Christ of Latter Day Saints.

Ronald Deane Harrison was born in Malad, Idaho on July 5, 1929 to Lily Rosenberg and Jesse Dredge Harrison. He passed away on October 16, 2021 in his home in Hyrum, Utah. He was preceded in death by infant daughter, Tamera Harrison, wife... View Obituary & Service Information

Send flowers to the Harrison family.