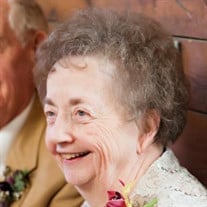 Rosalie Waite Saunders, 81, passed away peacefully in her home on August 17, with the love of her life, Willard Gimbert Saunders, Jr, right beside her. Her final days were spent surrounded by Will, her children, grandchildren, and great grandchildren. She was born April 8, 1939, in Hyde Park, Utah (or Zion as she called it) to Owen and Norma Waite. She has two sisters, Nancy Freeman and Joan Griffin, and a brother, Glen Waite. Everyone that knows our mom, talks of the amazing love story, that most would say was something only seen in the movies, but was her real everyday life. From their first “hello” her life and heart were changed by Will. The majority of their courtship was spent exchanging letters, with very little time together due to Dad's military service, but never has anyone loved another as our dad loves our mom. After 55 years of marriage, they still hold hands, dance endlessly - whether in the living room or atop the Eiffel Tower, laugh together, and stare lovingly at each other from across the room. The two of them have been practically inseparable, except for Dad's time in the Army and while he was at work. And often, when they were apart he would continue to write the most beautiful letters and poems to her. Together they have built a legacy of love. Rosalie and Will were married May 21, 1965 in the Logan LDS Temple. Will had two children from a previous marriage, Michelle and Schuyler, and together they welcomed eight more children, five boys and three girls. Rosalie was blessed to be a stay-at-home mom and loved being able to talk with her children when they returned home from school. She spent many hours cooking, cleaning, supporting our various activities, sewing dresses and many dance costumes. Rosalie and Will have been on many adventures together, spent a lifetime serving the Lord and have visited several LDS temples throughout the world, and made several great friends along the way. They loved traveling together and always made family vacations a priority. Our dad cared for his dear wife right up until the end. She was blessed to remain at home until her final breath. Dad lovingly nursed and cared for her, prepared her meals, and sang to her. Rosalie loved baseball and played for several years. She was a pitcher on a fast-pitch softball team, and developed a love for the New York Yankees early on in her life because of her own dad. She continued to be an avid baseball fan, especially of the Yankees, and has shared this love with her husband and children. Will and Rosalie spent many hours watching the Yankees on TV, and have watched them play several times in New York and other ballparks throughout the U.S. One year they even traveled with three of their kids and a grandson to Florida for Spring Training. She has a spare bedroom (or a shrine as we call it) dedicated to her favorite team. Rosalie loved giraffes and pandas, and has collected several stuffed versions she put on display. She loved Christmas and spoiled her children each year. Even when money was tight, Mom made sure we had a Christmas to remember. Mom and Dad would dip hundreds of chocolates and make fruitcake every Christmas. It was her favorite holiday by far. She loved the story, “The Polar Express,” and would share it with her kids and grandchildren every year at the family Christmas party. The bell still rings for her. Rosalie was a strong member of The Church of Jesus Christ of Latter-Day Saints. In her youth, she served a mission to Paris, France. There she gained a great love for the people and the city of Paris. She had an unwavering testimony and faith in Jesus Christ, and also had a special love for the Prophet Joseph Smith and his wife Emma. She served in all organizations of the church throughout her life, and she and Will served many years together in the Logan Temple. They were lucky enough to serve three missions together after their children were raised: New York-Utica, Belgium - Brussels/Netherlands, and France-Paris. Rosalie is survived by her eternal sweetheart of Hyde Park; four sons, Darrin (Angela) Saunders of Nibley UT, Kim (Jennifer) Saunders of Hualien Taiwan, Brian (Norma) Saunders of Yakima WA, and Christopher (Tiffiney) Saunders of Salt Lake, UT; three daughters, Jill (Robert) Olsen of Tremonton UT, Nicole/Nikki (Jeff) Lowe of Wellsville UT, and Robyn (Matthew) Storms of Layton UT; one sister, Nancy (Bert) Freeman of Helena MT; two sisters-in law, Carroll (Alan) Wayman of Perry UT and Karma (Glen) Waite of Nibley UT; thirty grandchildren and three great-grandchildren. She was welcomed in heaven by her sweet son Troy Marinus Saunders, her parents, and her brother and sister. Funeral services will be held at noon, Friday, August 21, 2020, at the Nelson Funeral Home, 162 East 400 North, Logan for family and close friends. A viewing will be held at the Nelson Funeral Home Thursday, August 20, from 6-8 pm and again Friday morning from 10:30-11:30 am. Rosalie will be laid to rest in the Hyde Park Cemetery next to her son Troy. To view the service live, follow the ZOOM link https://us02web.zoom.us/j/86359719872

Rosalie Waite Saunders, 81, passed away peacefully in her home on August 17, with the love of her life, Willard Gimbert Saunders, Jr, right beside her. Her final days were spent surrounded by Will, her children, grandchildren, and great grandchildren.... View Obituary & Service Information

The family of Rosalie Waite Saunders created this Life Tributes page to make it easy to share your memories.

Rosalie Waite Saunders, 81, passed away peacefully in her home...

Send flowers to the Saunders family.