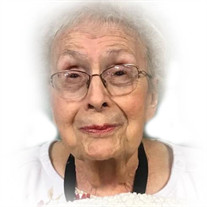 Our loving wife, mother, grandmother, and great-grandmother, Ruby Berneice Jennings (Locke), 92, was reunited with her sweetheart, Bruce M. Jennings, Jr. on Sunday, Jan. 20, 2019. Berneice passed away peacefully at The Gables Assisted Living in Brigham City, UT surrounded by family. Berneice was born on Nov. 25, 1926 in Medford, OK. She graduated from Medford High School in 1943. She also attended business college in Wichita, KS. She then worked many jobs in retail and later became a waitress at The Bon Ton Cafe in Medford. She married the love of her life on Nov. 2, 1946 in Enid, OK and they started their family in 1947. She and her husband raised five children, while also making numerous moves throughout the United States with Mobil Oil. Berneice and her husband moved their family from Houston, TX to Sheridan, WY in 1974. Berneice's greatest joy came from spending time with her kids. She loved teaching them all about flowers, and she grew the most beautiful African violets you would ever see. She enjoyed cooking and loved teaching her children how to cook. Berneice was famous for her fried chicken, fried tenderloin, and steamed steak. She loved collecting cookbooks and enjoyed trying out new recipes. She was always setting an example to her kids of what it meant to be a friend to others. Berneice was known for her one-liners and her humor. She could brighten your day in just ten short minutes of talking with her. She was a sweetheart who loved visiting with her family, sharing stories, and always having a Pepsi with dinner. She appreciated good manners, good jokes, good food, and good people. Berneice loved to serve others and was very involved in the community. She was an active member of the First Presbyterian Church and a member of several Presbyterian Circles. She served as the President of the Sheridan Homemakers Club, and was a member of numerous garden clubs in Texas and Wyoming. Berneice was preceded in death by her parents, Marion Isaac Locke and Ida Pearl Locke (Pryor); her husband, Bruce M. Jennings, Jr.; her only sister, Mary Joan Hill (Locke); and two sons, Bruce M. Jennings III and Gordon Jene Jennings; and a son-in-law William Vernen Plocek. Berneice is survived by her children, Maribeth Plocek (Jennings) of Casper, WY, Joan Nelson (Jennings) of Honeyville, UT, Charles Jennings of Willard, UT; 18 grandchildren; and 31 greatgrandchildren. There will be a memorial service held at a later date in Sheridan, WY. Condolences and memories may be shared with the family on line at www.nelsonfuneralhome.com

The family of Ruby Berneice Jennings created this Life Tributes page to make it easy to share your memories.

Send flowers to the Jennings family.