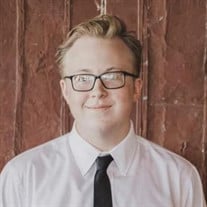 On February 9th, our son and “biggest little” brother, Ryan Eugene Weller left our home to join his oldest sister, grandfather, and other cherished relatives and friends. He came into the world in a blizzard on November 29, 2001, born at home to Alissa and Friend Weller in Hyrum, Utah. Ryan lived life fearlessly with a taste for adventure. At two years old he set off on a mission to walk to the grocery store -- a mile away from home. When he was seven, Ryan jumped off the diving board into the swimming pool without knowing how to swim, thinking he could naturally just do it. One thing that did come naturally was riding his big red bicycle around the neighborhood. Lacrosse came easily and with his athleticism and stature, he was a presence to be feared on the playing field, easily observed when members of the opposing team would scatter as he drove for the goal. Snowboarding was another favorite pastime Ryan enjoyed. Ryan always would say that he was “born for snow”. This winter has been a disappointment for him with the record-low snowfall. Ryan did well in his studies at Canyon Elementary, White Pine Middle School, and at the South Cache 8th/9th Center. At 15, Ryan was diagnosed with juvenile myoclonic epilepsy. While this was a difficult and life-changing diagnosis, Ryan never lost his optimism and happy demeanor. He continued to be active and would be involved in “physical altercations” with his older brothers, often at family and holiday gatherings. Only last month with a playful glint in his eye, Ryan picked up his father and did a full squat before setting him back down on his feet, over his father’s objections and to his mother’s amazement. Ryan enjoyed online gaming with several friends and the neighbors would comment they could hear his exuberant exclamations while playing “world war three” in his basement bedroom. Ryan possessed a large, loud, and loving presence. He idolized his older brothers and sisters, and even though they were much older than he and no longer lived at home, he never felt like an “only child” as they were in frequent contact with him. He also spent much time with his childhood friends Zac Cutler and Porter Santistevan, and his “brousin” Rigg Rowan. Ryan attended Mountain Crest High School transferring to Cache High in order to complete his studies in the face of the learning challenges that his epilepsy presented him. Ryan graduated from Cache High, Class of 2020, giving him confidence that he DID have a future and DID have a life ahead of him. Ryan loved his job at Cache Valley Plating. He would leave early in the morning and return in the afternoon to his loyal pitbull mix Chance with stories about how his day had gone. Ryan and Chance were practically inseparable and would spend time at the dog park or just sitting in his bedroom listening to recordings of Frank Sinatra or Dean Martin, or Sammy Davis, Jr. To hear Ryan belting out a tune from a member of the “Ratpack” while in the shower was a frequent occurrence that brought a smile to the faces of and joy to the hearts of his parents. Sadly, Ryan's future was cut short after suffering from a seizure in his home last Tuesday. Even after the valiant efforts of his father and Hyrum City and Cache County EMT’s and deputies, Ryan was already onto the next great adventure that the eternities have in store for him. Ryan leaves behind his father, Friend Weller and mother Alissa (nee Floyd) of Hyrum, sisters Cara Louise (John Stephens) of Simi Valley, California, Bethany Lynne (Kate Black) of Salt Lake City, Alexa Rose (Shaun Schenck) of North Logan and brothers Gregory Friend of Willard, Trevor Floyd (Ali Spittler) of Heber City, and Ivan Earl of Sumner, Washington. He is also survived by his grandmother Gloria Weller of Layton, grandparents Darrel and Karen Floyd of Farr West and numerous aunts, uncles, cousins, nieces, and nephews. He was preceded in death by his grandfather, Eugene Weller of Layton, and his oldest sister Amber Kae. Services honoring Ryan’s life will be held at Nelson Funeral Home, 162 East 400 North in Logan, at 1pm on Tuesday, February 16th, 2021 with a viewing starting at 11:30am. Due to concerns about inclement weather, road conditions, and the pandemic, Ryan’s service will also be live streamed on his brother’s Facebook page at www.facebook.com/trevwell . Ryan will be interred at the Hyrum City Cemetery. We express our sincerest appreciation to everyone who has been a friend to Ryan, the Neurology Unit at Primary Children’s Hospital, Cache County Sheriff's deputies and Hyrum City EMT’s, and our loving friends and neighbors, whether in Hyrum or anywhere they may be in the world of which Ryan found so fascinating. In lieu of flowers, we ask that donations be made to the Epilepsy Foundation of America in Ryan’s memory. We love you Ry-bug!

On February 9th, our son and &#8220;biggest little&#8221; brother, Ryan Eugene Weller left our home to join his oldest sister, grandfather, and other cherished relatives and friends. He came into the world in a blizzard on November 29, 2001,... View Obituary & Service Information

The family of Ryan Eugene Weller created this Life Tributes page to make it easy to share your memories.

Send flowers to the Weller family.