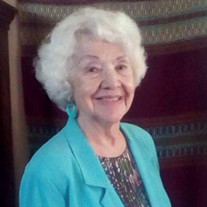 Sallie Elisabeth Webb, passed away 10th of February, 2022 in Brigham City, Utah. She was born Sallie Elisabeth Eriksson on 10th of October, 1933 in Greenwich, Connecticut to Carl and Dorit Eriksson, the second of six children. Sallie loved reading, sewing, and music. As a teenager, she sang with her two sisters at a radio station, and sang with her five siblings on other occasions. She made dolls for all of her great-grandchildren, she loved her family. Sallie is survived by two siblings, her brother Bob Eriksson, and sister Millie Eriksson. Four Children Virginia (Peter) Fogle, Sue (Rich) McClellan, David (Elaine) Webb, and Karin (Gordon) Lewis. 28 grandchildren and 40 great-grandchildren. She was proceeded in death by her parents, Carl and Dorit Eriksson, her husband Dale Owen Webb, two brothers Carl R. and Rick Eriksson, and one sister Irene Wulfenstein. Funeral Services are under the direction of Nelson Funeral Home, funeral services will be held 19th of February, 2022 at Nelson Funeral Home 162 E. 400 N. Logan, Utah. A Viewing will be held Friday the 18th of February from 6-8 pm at Nelson Funeral Home. Interment will be held in Oregon.

Send flowers to the Webb family.