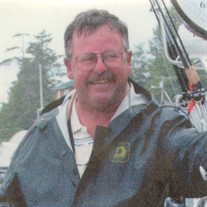 Samuel M. Weston was born July 31st 1950 in Logan, Utah to George Wesley Weston and Theda Mattson. He grew up on the family ranch chasing cows, getting into trouble with his brothers George and Tom, and teasing his sisters Christine, Alice, and Shelly. Sam had a soft heart and a generous spirit. He served in the National Guard until his honorable release in 1976 . He also served as a deputy sheriff and sheriff for Rich County. Sam had an entrepreneurial spirit, owning several businesses, including a packing plant and construction company, before he rediscovered the joy of his childhood and became a rancher and part owner of Yellowstone Ranch near Lander, WY. In his spare time, he enjoyed hunting, swimming, fishing, and snowmobiling. He and Rose Cox had two beautiful children, Megan and Benjamin. They enjoyed playing cards and chess as well as hunting, fishing, and just hanging out as a family. Sam had a boisterous, contagious laugh and there isn’t a child in his life that doesn’t have found memories of his playful spirit and good natured teasing. Sam passed away Oct. 26 2016 in Coolidge, AZ at the age of 66. He will be dearly missed by his daughter, Megan (Frank) Hernandez; his grandsons, Frank T. (Maria) Hernandez, Eddie (Chandi) Hernandez, and Colten Hernandez; and his great granddaughters, Cynthia, Kamiryn, and Benzleigh. He was preceded in death by his son, Benjamin Samuel; father, George Wesley Weston; and sister, Christine Webb. He is survived by his mother, Theda Weston; siblings George (Cathy) Weston, Tom (Vickie) Weston, Alice (Kent) Argyle, Shelly (El) Mettman; and brothers-in-law, Chuck Webb. He will also be missed by the many nieces and nephews that he made laugh, and sometimes cry, with his teasing. Viewing will be Saturday, November 5, 2016 from 10:00 – 11:45 with funeral services to follow directly at 12:00. All services held at the Laketown LDS Church. Interment following at the Laketown Cemetery. Funeral services are under the direction of Nelson’s Mortuary.

Samuel M. Weston was born July 31st 1950 in Logan, Utah to George Wesley Weston and Theda Mattson. He grew up on the family ranch chasing cows, getting into trouble with his brothers George and Tom, and teasing his sisters Christine, Alice,... View Obituary & Service Information

The family of Samuel M Weston created this Life Tributes page to make it easy to share your memories.

Send flowers to the Weston family.